Man had not yet walked on the moon when car magazines published the first comparisons between the Camaro and Mustang. Since the first showdowns of these models in the fall of 1966, car magazines have sold many issues with “Camaro vs. Mustang” cover lines. And more often than not, the Camaro has come out the winner. An in-depth look at these cars reveals key areas of performance and safety where the 2011 Camaro SS excels by a wide margin.

In 2011, drivers expect more than just straight-line performance from even muscle cars. Still, it’s worth noting that when Car and Driver matched the 2011 Camaro SS six-speed stick shift against the 2011 Mustang GT six-speed stick shift, the Camaro blasted through the quarter-mile in 13 seconds flat at 111 mph. The Mustang came up a bit short at 13.2 seconds at 109 mph. That equates to about two car lengths in a race.

When you look at the performance equipment each of these cars offers, you’ll find a decided advantage in the Camaro SS, which has an MSRP of $31,070 for the standard SS1 model. The 2012 Mustang GT begins at an MSRP of $29,310, but a disparity in braking technology favoring the Camaro SS quickly closes that gap. All Camaro SS models come standard with Brembo high-performance brand four-wheel disc brakes and 20-inch alloy wheels. The Mustang GT comes standard with 18-inch alloy wheels; upgrading to Brembo brakes and 19-inch wheels requires adding an option package for $1,695. However, odd but true, the package puts genuine Brembo brakes only on the Mustang GT’s front wheels.

Each of these cars arrives at its performance peak differently. Under the long Camaro hood beats the latest generation Chevy small block V8, in this case, essentially the same 6.2-liter engine used by the Corvette. The Camaro SS with a six-speed manual shift pounds out 426 hp at 5,900 rpm and 420 lb/ft of peak torque at 4,600 rpm. Those figures beat the Mustang GT’s smaller-displacement 5.0-liter V8, which offers 412 hp and 390 lb/ft of torque. Both cars offer an optional six-speed automatic transmission.

If you know your muscle car engines, you can tell from those figures that the Camaro SS is going to provide a more classic muscle car feel from its bigger-engine/higher torque personality. Edmunds Inside Line went a step further, measuring these cars’ ability to do a burnout; the Camaro SS laid down an astounding 186 feet of rubber, continuing right through second gear. The Mustang could muster just 72 feet. Though hardly a valid performance test, it does provide a fun demonstration of the superior low-end power of the Camaro.

On a more serious note, there is an area of chassis technology where the Mustang trails the Camaro in an indisputable way: All Camaro models, including the SS versions, ride on four-wheel independent suspensions while the Mustang remains among the last rear-wheel drive cars built with a solid rear axle. That’s a bit of muscle car nostalgia that drivers of other modern sports coupes would never accept. Drive a Camaro SS over a bumpy road, and that independent rear helps keep the big rear tires planted; a car with a solid axle car tends to “hop” a bit over bumps.

Style is a matter of preference, of course, but one cannot deny that the new Camaro knocked peoples’ socks off from the time it appeared as a concept car in 2006. The 2011 Camaro SS emotionally evokes the 1969 Camaro, but does not copy it. Both of these muscle coupes offer safety that’s light-years better than their 1960s forbears. Both are equipped with traction control and electronic stability control, for example. In terms of occupant protection, the Camaro comes standard with six standard airbags including side-curtain airbags for front and rear occupants. The Mustang, however, does not offer side-curtain airbags, which seems like a glaring omission in 2011. 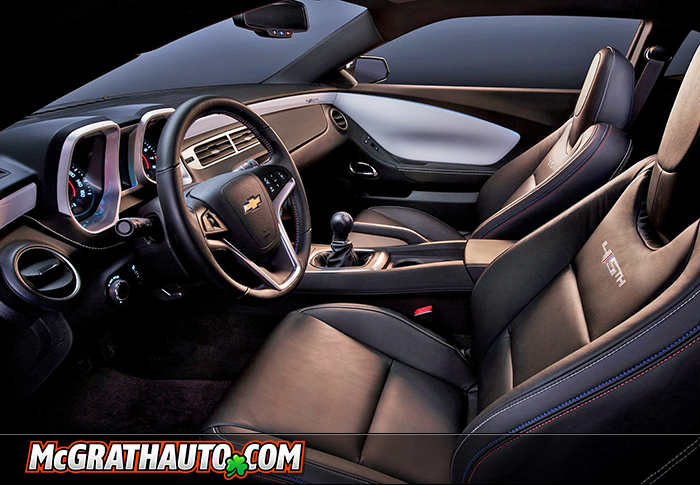 On the fun side of the ledger, you can equip the Camaro SS with a power tilt and slide sunroof, but not the Mustang GT. When it comes to connectivity, the Camaro SS comes standard with OnStar® including a subscription to Directions and Connections with Automatic Crash Response, Turn-by-Turn Navigation and other services for six months. The Mustang offers Ford’s SYNC® system, but you have to step up to the costlier GT Premium model to get it, and SYNC does not provide the full telematics capability that OnStar does.

Both the Camaro SS and Mustang GT have their share of partisan supporters who might not consider the other car. However, for those who analyze performance, safety and value, the 2011 Camaro SS clearly leads its esteemed competitor. Come in and test-drive this modern legend soon.