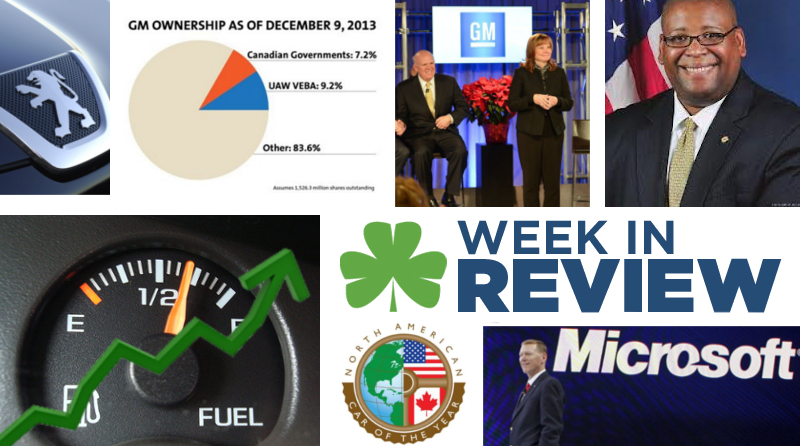 While most of the country is concerned with holiday shopping and plans to visit family and friends, the automotive industry was all business, with leadership changes, asset sales, and great news for America’s fuel-economy.

See who is stepping down from major leadership positions, both in the public and private sector, and what cars are up for major awards.

Also, find out why Ford’s directors are putting pressure on their CEO, and how GM has closed one chapter and is now writing a new history.

GM Free of U.S. Ownership: General Motors was able to close a chapter in its history as the U.S. treasury sold its last shares of GM stock on Monday. The sale ends more than four years of government ownership in the nation’s largest automaker.

General Motors Leadership Changes: Only days after the ownership announcement, GM CEO Dan Akerson announced that he will step down from his role on January 15th, 2014. Mary Barra, who holds a  global product development role, will move into the CEO position, becoming the first female to head General Motors.

General Motors Sheds Two Big Investments: Another major development came from GM, as the company announced it is selling its equity in automaker PSA Peugeot-Citroen and Ally Financial, the former GMAC. The sale of Ally is estimated at $900 million.

Ford Wants Decision from CEO:  Ongoing rumors linking current Ford CEO Alan Mulally to an executive job at Microsoft have prompted Ford’ board of directors to request a decision on his future. Directors are concerned that the Microsoft rumors are preempting media stories about new products and positive earnings.

NHTSA Leader Stepping Down: The National Highway Traffic Safety Administration will be seeking a new leader as David Strickland has announced that he will be stepping down. Strickland helped establish fuel-efficiency programs and brought attention to child-passenger safety and issues related to heat-stroke in hot cars.

National Mile Per Gallon Gains: The average fuel economy of vehicles sold in the U.S. has hit an all-time high of 23.6 mpg, up 1.2 from the previous year according to an EPA report. The EPA says carbon dioxide emissions have hit an all-time low, aided by vehicles with smaller engines and alternative fuel-sources.

Kia Continues Special Edition Prowess: Kia is continuing their string of impressive special edition models with the “Red Zone” Soul, featuring one-of-a-kind styling on the interior and exterior. The limited-availability Soul is expected to be available in early 2014. Learn more here

McGrath Auto is proud to offer high-quality new and used cars to the drivers of Cedar Rapids and Iowa City.