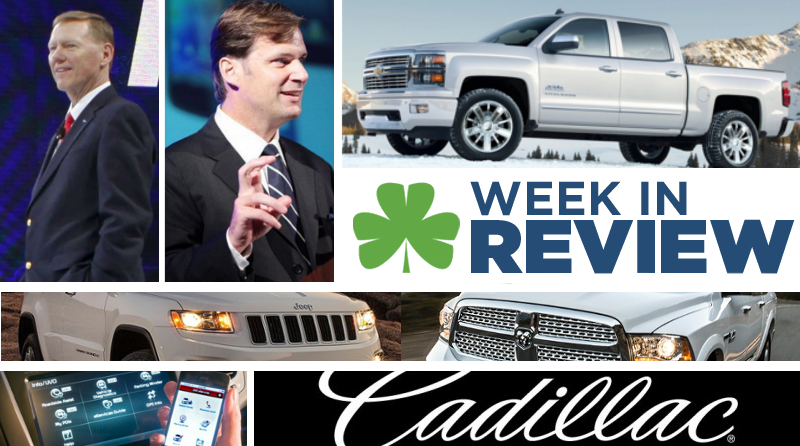 The automotive industry continues to plug ahead with production launches, new technology, and, of course, a little drama.

Find out what brand is looking to set the standard for future technology, and how the next Corvette will let you record your driving adventures.

Also, while one Ford executive confirms his commitment to the company, another is doing damage control after controversial statements.

Corvette Performance Recorder: Chevrolet announced that the 2015 Corvette will come with an optional Performance Data Recorder system that will allow drivers to record their track and road driving with video and embedded data, including speed, RPM, g-force, and more. The industry-first system will feature an HD camera mounted to the front, an advanced audio recorder, and a sophisticated data recorder connected to the Corvette’s information computer. Learn more here

Grand Cherokee, Ram 1500 Win Top Autobytel Honors: The Chrysler Group started 2014 on a high note as the Jeep Grand Cherokee and Ram 1500 won SUV and Pickup Truck of the Year respectively from Autobytel.com. This year’s winners were lauded for innovation, design and features. Learn more here

Cadillac Ends 2013 as Fastest-Growing Luxury Line: After the final 2013 sales numbers were tallied, Cadillac came out on top as the fastest-growing full-line luxury brand. Cadillac capitalized on a year that saw multiple awards, including Motor Trend and North American Car of the Year. Learn more here

Ford CEO  Plans to Stay: In one of the most batted around stories of the year, Ford CEO Alan Mulally finally and definitively confirmed he will not be leaving Ford to take a top position at Microsoft. Rumors of his departure had been a constant distraction for Ford, even when the company unveiled vehicles like the all-new Mustang.

Ram Diesel 1500 Entering Production: The Ram 1500 EcoDiesel, the only light-duty pickup with a diesel engine, is expected to start production this month and become available within weeks.  The highly-anticipated truck will have great torque and horsepower with superior fuel-economy. If you are interested in a Ram 1500 diesel, call Pat McGrath Dodge Country at 888-902-8414 for more information.

Future of Chevy on its Way: The future of large Chevy vehicles are getting set to arrive at Pat McGrath Chevyland in Cedar Rapids. Five 2014 Chevy Silverado 1500 High Country, a premium-trim level of Chevy’s popular pickup, six 2015 Chevy Tahoes, and one 2015 Chevy Suburban have been ordered and are set to arrive in the next few weeks. Call Pat McGrath Chevyland at 888-406-6073 for details. Learn more here

Ford Marketing Chief Doing Damage Control: During a panel discussion at the Consumer Electronics Show in Las Vegas, Ford Marketing Chief Jim Farley implied that Ford is tracking data on drivers, saying “we know everyone who breaks the law; we know exactly when you do it…we know where you are, we know how fast you’re driving”. Farley is now backtracking, saying he gave the wrong impression on how Ford operates.

New and Used Cars for all of Iowa

McGrath Auto is proud to provide high-quality, affordable cars to the drivers of Iowa City, Cedar Rapids, and all of Iowa.

Learn more about our tremendous service by visiting one of our six locations or calling 877-226-0908 today!