People need hardworking, reliable, and affordable vehicles, but making the right decision can be overwhelming.

Two of the most popular cars in America are the Toyota Camry and the Chevy Impala.

Both offer smooth driving and a comfortable cabin, but for 2014, which vehicle is superior? 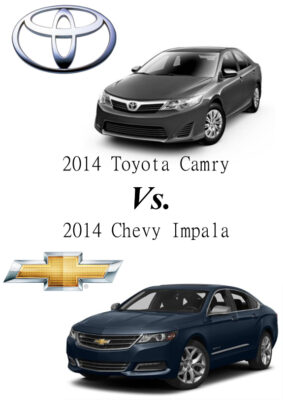 Superior Handling for Highway and Town Driving:
One of the first things people notice about 2014 Impala is its handling.

Superior Warranty for Peace of Mind:
Features, style, horsepower, and miles-per-gallon are all forgotten when you’re stranded on the road with a broken-down vehicle.

That’s why having a great warranty is so important, it not only gives you peace of mind, it can also save you thousands if a problem should arrive.

Both the 2014 Impala and 2013 Camry come with standard warranties, but the Impala takes it further with 40,000 more miles worth of powertrain limited warranty.

Take a look at the two warranties and see how the compare:

Clearly, if you are looking for something that helps you in the long run, the 2014 Chevy Impala beats the 2014 Toyota Camry every time.

Other publications agree, as The Car Connection gave the 2014 Impala an 8.2 rating, while it gave the 2014 Toyota Camry a very average 7.6.

Learn more about the 2014 Chevy Impala:

Call Pat McGrath Chevyland today at (319) 393-6300 to learn more about our superior service and large inventory.

If you are interested in a trade, fill out a Kelley Blue Book Trade-In Form to see what your trade-in is worth.