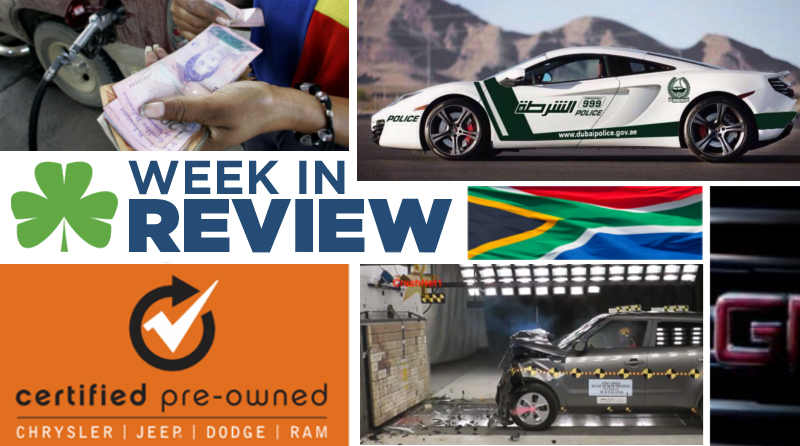 While it might seem like the time between Christmas and New Years should be a slow period for the automotive industry, the car and truck market keeps rolling along.

Check out this week’s top stories, including an upcoming record for certified pre-owned vehicles and big news about GMC’s upcoming midsize truck.

Also, we travel the globe with stories from South Africa, Dubai, and Venezuela.

2015 GMC Canyon debut heading for Detroit: To no one’s surprise, the debut of the 2015 GMC Canyon, a professional-focused midsize truck, will occur at the North American International Auto Show in Detroit. The January event is one of the largest automotive shows in the world. Learn more here

Certified pre-owned sales soar: Automotive News is reporting that 2013 sales of certified used vehicles are heading for a record 2 million units, with sales expected to keep climbing in 2014. Certified pre-owned vehicles offer affordable, reliable choices to drivers and often come with extended warranties. McGrath Auto has a large inventory of Certified Pre-owned vehicles. Give us a call or browse our used car inventory.

Dubai adds a $250,000 cop car to fleet: Dubai, an oil-rich state located in the United Arab Emirates, has added a McLaren MP4-12C , a supercar worth about $250,000, to its already-opulent police fleet. The police garage already included a Lamborghini Aventador ($397,00) , a Ferrari FF ($295,000), and 700-hp modified Mercedes-Benz Wagen, while the Dubai fire department has a Corvette Stingray for safe keeping.

Venezuela may increase fuel costs: Venezuelan drivers may soon have to shell out more than 5 cents per gallon, according to the nation’s president Nicolas Maduro. Autoblog.com reports that the price of gas has been frozen at the equivalent of a nickel for about 20 years, but an economic crisis could be eased by gradually increasing fuel prices.

McGrath Auto wants to help you get a great vehicle at a great price.

Give us a call at 877-226-0908 to learn more about our tremendous service and large inventory.