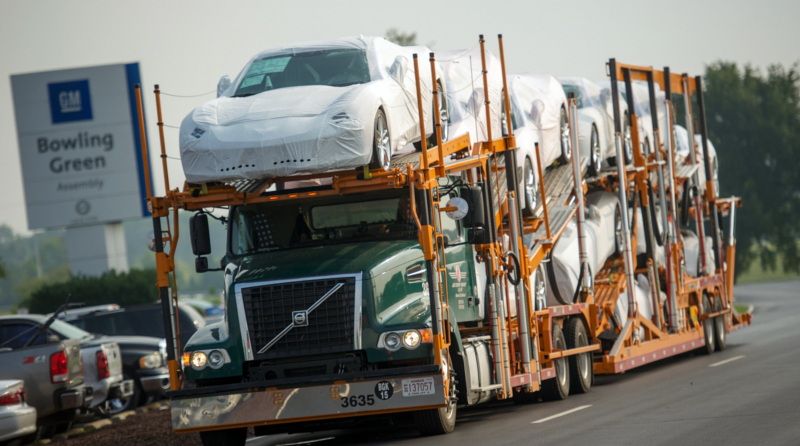 The first 1,000 2014 Chevy Corvette Stingrays have been completed, and they are now being loaded up and shipped to select locations all across the country, including Cedar Rapids, Iowa.

The all-new Corvettes were assembled at GM’s plant in Bowling Green, Kentucky, which received a major remodel in order to produce the vehicles.

Plant leaders and managers expressed their excitement for new vehicle and their pride at being part of the 2014 Corvette’s production.

Plant manager Dave Tatman said it was “amazing to see the transporters filled with Stingrays heading to customers in all corners of the country”.

“The pride at Bowling Green is overwhelming and it shows in the tremendous quality and attention to detail going into each one of these new Corvettes.”

In preparation for the 2014 Corvette Stingray, the plant underwent a $131 million dollar project, which included $52 million towards a new body shop that is manufacturing the car’s all-new aluminum frame. This marks the first time that the frame has been built in-house.

The 2014 Corvette marks the 7th generation of the highly recognizable American sports car.

The fuel-efficiency and acceleration is bolstered by the lightweight aluminum frame, while the roaring engine gives the z51-equipped model a 0-60 time of 3.8 seconds. The car can also run the quarter-mile in 12 seconds at 119 mph.

Not only is the all-new version the most powerful standard Corvette ever built, it is also going to be one of the most fuel-efficient sports cars, reaching 17 mpg city and 29 hwy.

Available features like the performance exhaust system and magnetic selective ride control make the 2014 Corvette Stingray one of the most technologically advanced sports cars ever made.

We’ll help you find the right car or truck at the right price, so give us a call today!