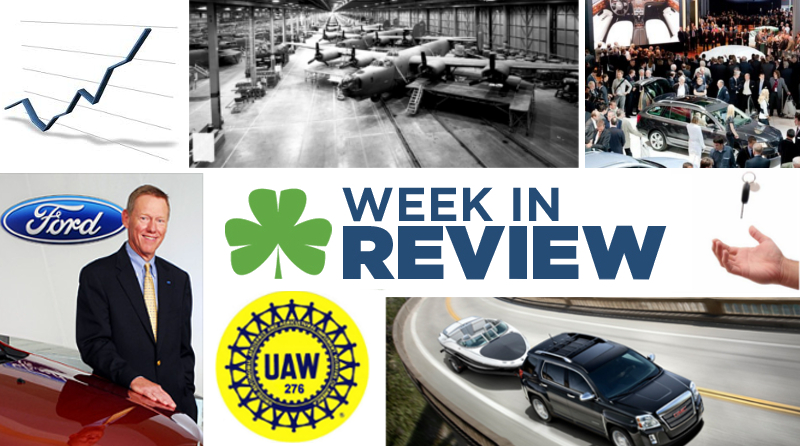 The first week of September was full of excitement, with uplifting sales figures and anticipation for a massive auto show in Europe.

But there was also some sobering news, including recalls from Toyota and the demolition of a historic assembly plant.

Find out how GMC is keeping its drivers informed, and what foreign automaker is talking with a major American union.

U.S. Auto Sales Reaching Pre-Recession Levels: The U.S. automotive industry continues to climb, with sale on pace to pass 16 million this year. If the current 2013 trend holds, automotive sales will reach levels not seen since before the 2008 recession.

GM Leads the Detroit Three in Leasing: Research from USA Today found that General Motors is leading the Detroit Three (GM, Chrysler, Ford) in lease deals. 20% of GM’s sales are coming off of lease agreements, up from 2% in 2008. Learn more here

Ford CEO Stays Through 2014: Ford CEO Allen Mulally says he plans to stay at Ford “until at least the end of 2014.” Reports by Reuters and other news sources linked the 68 year-old Mulally to a position in the Obama administration and a potential leadership role at Microsoft.

GMC Launches Trailering App: Drivers who haul trailers can find information on towing and trailering through a new smart phone app released by GMC. The app lets users search by vehicle or enter specific information to find the right towing vehicle for their needs. Videos, a glossary of terms, and tutorials are also included. Learn more here

Vehicle Research Plant Slated for WWII Bomber Plant: The Willow Run plant in suburban Detroit, which was used to manufacture B21 bombers during World War II, is being demolished to create a connected vehicle research facility, with a section being preserved by a local museum. After the war, the plant was used as a GM assembly plant.

Frankfurt Auto Show Kicks off Next Week: The world’s largest auto show kicks off on September 10th, giving the world a glimpse of current and future vehicles coming from top automakers. The show is an major event, specifically for German brands like BMW and Mercedes-Benz. Check in to this blog next week for news and information from Frankfurt, Germany.

Toyota and Lexus Vehicles Being Recalled: Toyota is recalling a total of 396,000 related to two different issues.  One affects Lexus and Toyota hybrid SUVs affected by a modular issue, while the other is prompted by an engine assembly glitch in Lexus cars.

UAW and Volkswagen Talk in Tennessee: The United Auto Workers union met with Volkswagen officials in Germany about representing workers at a VW factory in Chattanooga, Tennessee.  Currently, no foreign automakers have UAW representation despite previous effort by the UAW to organize plants.