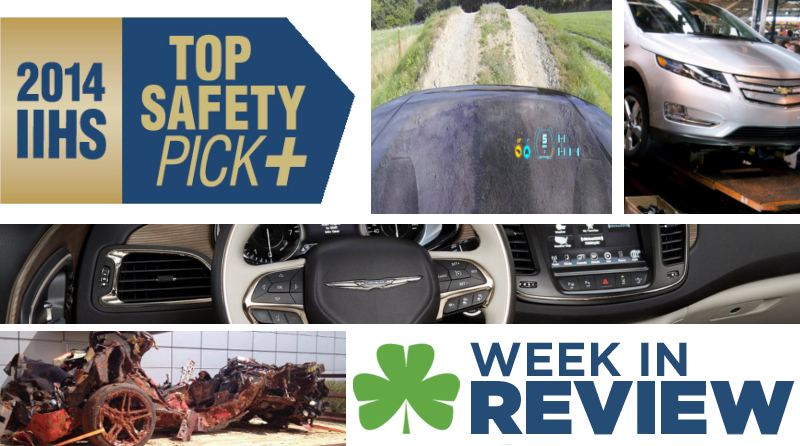 This week’s review has some very interesting technology along with excellent new products.

How about an invisible hood on an off-roading SUV? Is that interesting enough for you?

Plus – find out what brands rank at the top of customer satisfaction according to a major industry report.

Top Safety Ratings for GM SUVs: The 2014 Chevy Equinox and 2014 GMC Terrain were named Top Safety Pick+ by the IIHS. The two vehicles won the highly-coveted designation by being the only SUVs out of nine tested to receive a “Good” rating in the challenging small overlap front test. Learn more here

Ram Heavy-Duty Black Package: Ram is offering an all-black version of their 2500HD and 3500HD trucks. The menacing package, which has black wheels, a black grill, and a black ram logo, is available for numerous models including Big Horn and Laramie versions, and is available on either two- or four-wheel drive.

Land Rover’s Transparent Hood: No, this isn’t something out a Wonder Woman comic. Land Rover has released information on their Discovery Concept SUV, which features the “invisible bonnet”. The technology uses a front camera and projects an image onto the windshield, creating the appearance of an invisible hood and allowing a driver to see the area blocked by the front end.

General Motors Investing in Electric Cars: GM has announced that they will invest $449 million to plants in Detroit in order to produce the Cadillac ELR, the 2nd generation of the Chevy Volt, and a vehicle under the Opel brand. Vehicles produced at the plant, as well as the batteries that power them, will be sold in America as well as Europe and other areas.

Two Versions of the Volt in the Works: While we’re talking about the Volt, Chevrolet plans to sell two versions of the plug-in hybrid. One will be a lower-priced model that will hold a smaller battery pack, giving drivers a budget-focused option for the popular car.

Ward’s Auto Announces Best Interiors list: Ward’s Auto released their list of the top interiors for 2014, with great vehicles like the Jeep Cherokee and Corvette Stingray being added to the list. According to the publication, the 10 winners “represent a broad swath of cars and SUVs available in the U.S.” Learn more here

Cadillac and Buick at the Top of Customer Satisfaction: GM brands rank at the top of customer satisfaction according to the 2014 J.D. Power Customer Service Index, which measures customer happiness at franchise dealers. Cadillac ranks highest among all luxury brands, while Buick tops the mass market segment.

Final Corvette Lifted from Sinkhole: The last Corvette has been rescued from the massive sinkhole at the National Corvette Museum in Kentucky. The 2001 Mallet Hammer Z06 Corvette is possibly the most damaged of all eight Corvettes to fall in the hole, as the Mallet was buried under wreckage, dirt, and debris.

With six locations throughout the Iowa City and Cedar Rapids area, we have the right vehicle near you.