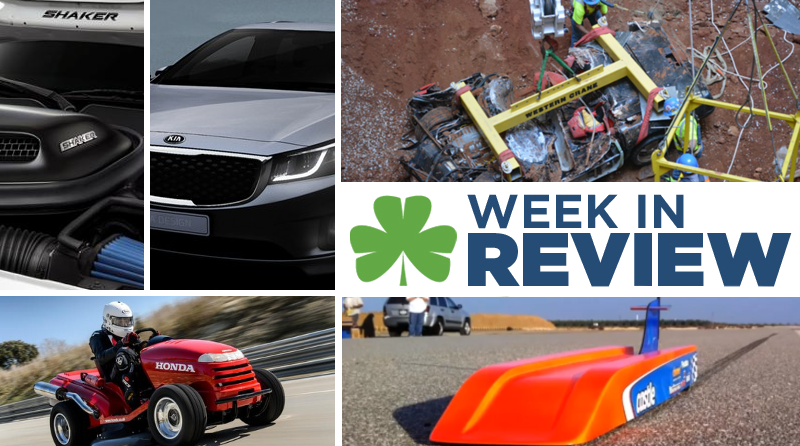 This week’s review features new records and new models, but it also has a couple of old throw-backs.

See what television-car replica is up for auction, and how a new mandate is expected to save up to 70 lives a year.

Also, who’s the biggest automotive advertiser in the U.S.? Find out who spent the most money to get your attention.

U.S. Auto Sales Climb in March: The month-end numbers for March came in this week, and automakers were happy to report a 6% overall rise in U.S. automotive sales. Analysts were expecting a flat 1st quarter for 2014, but pent up demand in March helped launch sales after the rough January and February.

Back-up Camera Mandate: U.S. government has officially made back-up cameras a required feature on all new cars starting in 2018. NHTSA says the new law, which requires the camera system to display a 10 x 20 ft area behind the car, will save nearly 70 lives a year.

6th Corvette Rescued from Sink Hole: Workers have safely pulled a 6th Corvette from a massive sinkhole that opened at the National Corvette Museum in Kentucky. The severely damaged ZR1 Spyder was lifted from the wreckage, and while GM says they will restore all the vehicles, this one appears to be in much worse shape than the others. Two Corvettes are still in the sink hole.

Kia Previews NYC Auto Show: Kia Motors has announced that they will unveil an all-new midsize vehicle at the upcoming New York Auto Show. According to a press release, the global debut will challenge the midsize segment and have room for eight passengers. Kia also release a teaser image of the upcoming model.

Mopar Challengers Sold Out Fast: Chrysler says is has sold all 100 of the limited-edition Mopar Challengers in the first day of availability. The car sports a 5.7L HEMI V8 and a shaker hood that shows-off the powerful engine, as well as unique features like Gloss Black aluminum wheels and Mopar design badging and decals.

Knight Rider Replica Up for Sale: David Hasselhoff, star of the show Knight Rider, is putting his replica KITT car up for auction, with an estimated sales price of $30,000 to $50,000. The Pontiac Trans Am, which was not a part of the show, was fitted with the familiar yoke steering wheel, scissor doors, and exterior lighting. The builder also programmed the car with over 4,000 sound clips from the show.

GM is the Top Automotive Advertiser: General Motors is the largest automotive advertiser  and the 2nd largest advertiser overall in the U.S. The company spent 1.8 billion advertising Chevy, Buick, Cadillac, and GMC vehicles. Only Proctor & Gamble, maker of consumer goods like shampoo and mouthwash, spent more on advertising.

Let us help you find a great car at a great price. Call McGrath Auto today at 877-226-0908 to learn more about our excellent service and large inventory of high-quality vehicles.