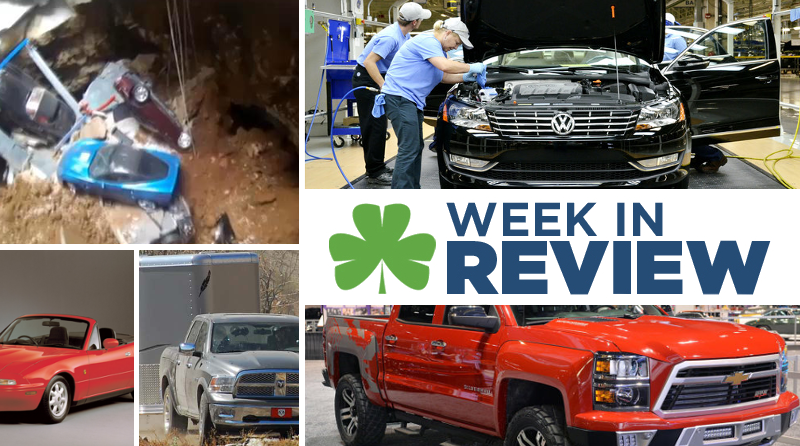 Happy Valentine’s Day! It’s the day of love, and we’d like to show you how much we care by sharing this week’s tops stories.

Find out how 8 classic Corvettes were damaged in one fell swoop, and what American brands found themselves in the top 5 for overall quality.

Also, why does a vote in Tennessee have such long-reaching ramifications, and how do the Detroit Three plan to standardize towing measurements.

Don’t Fear the Chevy Reaper: Chevrolet showed their answer to the Ford Raptor: the Chevy Reaper, an off-road ready truck based on a Chevy Silverado Crew Cab. The limited-availability truck will come with two engine choices, but what really makes it standout is the menacing exterior design and off-road engineering.

Detroit Three Agree on Unified Towing Measurement: In the never-ending battle for towing supremacy, Ford, Chrysler, and GM have agreed to use one standard measurement, as opposed to different measurements for each company. This should help buyers make a more informed decision when looking for the right truck.

Mazda Miata Turns 25: The Mazda MX-5 Miata celebrated the 25th anniversary of its initial release this week. While not the most stunning sports car on the road, the little roadster is significant for launching a trend of affordable sports cars and becoming the best-selling two seat sports car in history.

Toyota Recalls 1.9 Million Priuses: Toyota is recalling almost two million of the new generation Prius vehicles worldwide, including 713,000 in the U.S. The recall is due to a software glitch that causes the vehicle to shut down.

Volkswagen-United Auto Workers Vote: Voting began on whether the UAW would represent workers at a Volkswagen plant in Tennessee. The final decision could have a ripple effect on the future of the UAW and labor negotiations in foreign-owned plants in southern states.

Sink Hole Consumers Classic Corvettes: A giant sinkhole collapsed a large part of the National Corvette Museum in Bowling Green, Kentucky, swallowing 8 classic Corvettes, including the 1 millionth Corvette, a white 1992 model. GM has said that it will take charge of restoring the vehicles.

Any day of the week, we want to help you find the right car at the right price.

Call McGrath Auto today at 877-226-0908 and learn why we are the most trusted source for new and used vehicles in Cedar Rapids and Iowa City.