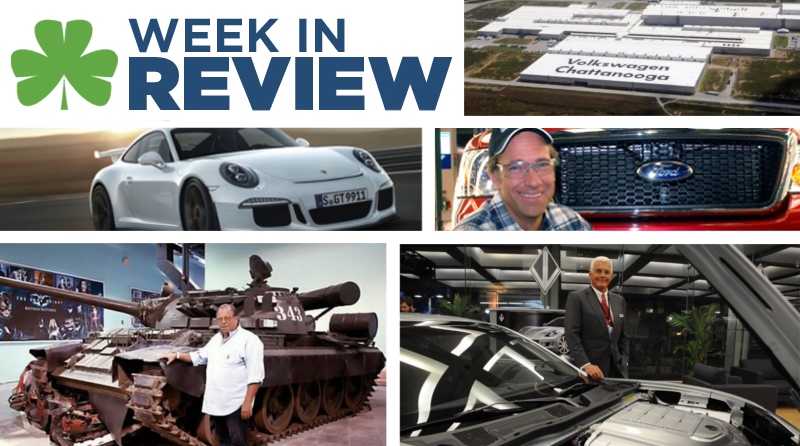 The automotive world is hauling through February with excitement, changes, and historic events.

This week saw results from one of the biggest labor events in recent memory: the Volkswagen-UAW vote in Tennessee.

Also, find out what spokesman is leaving his job with a top automaker, and how you can buy the biggest James Bond vehicle collection in the world. (Hint – you’ll need a check with a lot of zeros!)

UAW Rejected in Tennessee: Late Friday night last week, word came in from Chattanooga, TN, where workers at a Volkswagen plant were voting to decide whether they would join the UAW or remain independent. The results had workers rejecting the UAW, dealing a profound blow to a union that has been suffering declining membership for decades. The results could have fallout for not only the UAW, but the entire future of union representation in southern states, where many foreign automakers hold assembly plants.

Mike Rowe Parts with Ford: In what appears to be a cordial thank-you-and-goodbye, Mike Rowe, the 7-year spokesman for Ford and former host of the show Dirty Jobs, has said his time with the automaker has come to an end. Rowe, known for his blue-collar approach to work and life, pitched numerous Ford vehicles like the F-150 and Mustang, but is moving on to other ventures, including a promotional campaign for his new book.

Japanese Plants Suspend Production: America isn’t the only nation experiencing a rough winter. This week, automotive plants in Japan were shut down due to heavy snowfalls, the heaviest in 50 years. Plants in the Tokyo area were affected, including manufacturers with Toyota, Nissan, Honda, Suzuki, Mazda and Subaru. Most Japanese plants have been reopened after shutting or slowing down for at least a couple days.

Fisker Getting a Corvette Engine: The Fisker Karma, a plug-in hybrid that was unveiled last year, is now getting a powerful performance engine straight from the Chevrolet Corvette Stingray. The brainchild of former GM vice chairman Bob Lutz, the new vehicle will be built by VL Automotive, which will take Corvette engines and plant them in Karma bodies.

Largest James Bond Car Collection Up for Sale: Got a cool $20 million sitting around? Then you could purchase the largest collection of vehicles from 007 films, including six Aston Martins, the submarine Lotus Esprit from The Spy Who Loved Me, and a tank from Goldeneye. The collection is owned by New York real-estate mogul Micheal Dezer and includes around 60 cars, helicopters, hovercrafts, and more.

Porsche Recalls and Stops Delivery of GT3: According to Rueters, 785 Porsche 911 GT3 models will be recalled worldwide to address engine fire concerns. Porsche will also halt sales of the vehicle until the issue can be solved.

You deserve a great car, so work with us and let’s make it happen. We can even help with our dedicated Credit Department.