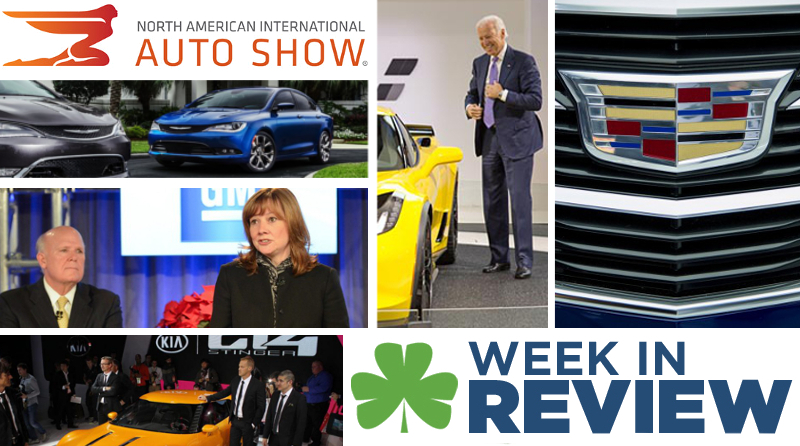 This may be the busiest week for the automotive industry, and it’s all happening in one American city.

Find out how Chevy is unleashing their performance potential, and how Chrysler is injecting some excitement into a stale segment.

Detroit Auto Show: The North American International Auto Show held in Detroit kicked off this week with a flurry of debuts from foreign and domestic automakers. This is the most important automotive event in the nation, and easily rivals automotive events across the country when it comes to media attention and industry significance.

Chevy Unleashes High-Performance Corvettes: Chevy furthered their domination of the performance and racing world with two high-powered Corvettes: the production 2015 Corvette Z06 and the Corvette C7.R racecar. Both of these vehicles hold a turbocharged 6.2L engine and take advantage of hundreds of hours of aerodynamic research. Learn more here

GMC’s New Truck: GMC unveiled their new midsize truck, the 2015 GMC Canyon, which is expected to raise the segment standard for horsepower, efficiency, and refinement. General Motors says this truck will be perfect for individuals who need pickup utility without the size of a larger GMC Sierra. Learn more here

Future of Cadillac Comes to Light: Cadillac unveiled the all-new 2015 Cadillac ATS Coupe, a sporty, two-door version of the popular luxury car. While the vehicle as a whole is extremely impressive, one of the most noteworthy features is the new Cadillac logo, which is wider, more detailed, and drops the historic wreaths. Learn more here

Chryslers Breaths Life into Midsize Sedans: Chrysler is putting some much-needed excitement into the mid-size sedan segment with the 2015 Chrysler 200. The vehicle will includes innovate technology and advanced mechanics, but what really makes it standout is the classic American design and craftsmanship. Learn more here

Kia shows High-Powered Concept: Kia took the wraps off the GT4 Stinger, a high-powered, sleekly-styled concept car that hearkens back to the glory days of affordable sports car. It’s the brand’s most aggressive concept car ever, giving a hint to what the Kia designers and engineers have in store for the future.  Learn more here

Motoring General Motors: Akerson Out, Barra In: Outgoing GM CEO Dan Akerson made his parting statements in Detroit, while Mary Barra officially took over has the first female to lead a major automaker. Akerson is credited with piloting GM’s turnaround, while Barra’s expertise in product development is expected to continue the momentum built over the past few years.

Joe Biden Makes Stop in Detroit: Vice President Joe Biden made a stop at the Detroit auto show, taking a look at new vehicles and offering his opinion of the current automotive industry. Biden gave a pep talk, saying “we bet on American ingenuity…and we won”. Biden also had the chance to check out the Corvette Z06 and other new vehicles.

Need credit approval? Work with our dedicated Credit Department and get the auto loan you need!