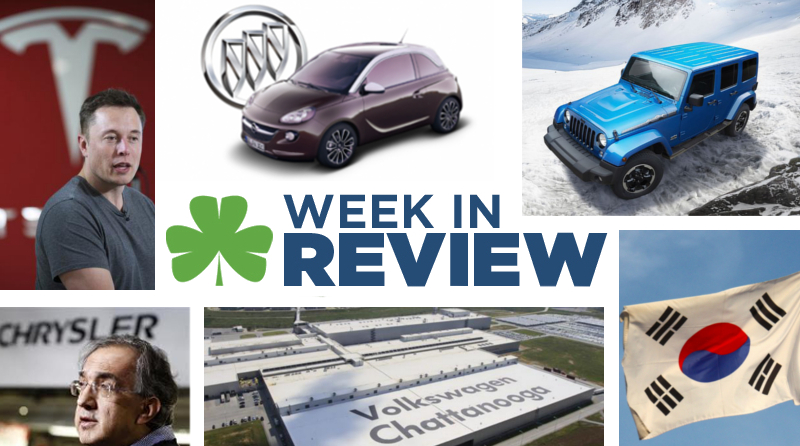 Busy seemed to be the word of the week.

Automakers were busy showing off their wares at a major European car show, while one automaker’s CEO was unable to make it due to “unforseen business commitments”.

Find out what Jeep has in store for the 2014 Wrangler, and why one electric car maker may have to slow things down after a period of rapid growth.

Hyundai and South Korean Unions Reach Agreement: Hyundai Motors reached a final agreement on a wage deal with South Korean unions, ending an ongoing labor disruption that began on August 20th. According to the Financial Times, the strikes set Hyundai behind by 50,000 vehicles.

The World’s Largest Auto Show in Germany: The Frankfurt Auto Show is the largest auto extravaganza in the world. This year’s show started on Tuesday, Sept. 10th and runs until Sept. 22nd. The show is a display of cars, trucks, motorcycles, and automotive technology from manufacturers all over the globe.

2014 Jeep Wrangler Polar Makes Debut: At the afore mentioned Frankfurt Auto Show, Jeep displayed the newest variation of the Wrangler: the Polar edition. Like the Sahara, the Polar is designed to appear completely unique from other Wranglers, with exclusive badging, paint, and stitching.
Learn more here

Chrysler CEO Skips Frankfurt: According to the Detriot Free Press, Sergio Marchionne, CEO of the Chrysler Group, had to skip the Frankfurt Auto Show due to “unforeseen business commitments”.  He was scheduled to host two media events in Frankfurt, but no official reason was given for the absence; although his cancellation did fuel speculation on possible discussions with the UAW.

Opel Adam may be Buick minicar: The Opel Adam, a popular European minicar sold by GM, could be the basis for a new Buick. GM leaders said the shared platform would be a great chance for Buick to complete with the Fiat 500 and BMW’s mini. GM currently sells overseas Opel versions of the Buick Encore and Enclave.
Learn More Here

UAW and Volkswagen Continue Courtship: The United Auto Workers continues talks with Volkswagen leaders to implement a German style work council at VW’s Chattanooga, Tennessee plant.  The UAW says it has strong backing among the plant’s workers, while Senator Bob Corker, who played a strong role in bringing the automaker to Tennessee, says the move would make VW a “laughing stock.”

Tesla Running Low on Batteries: As electric carmaker Tesla Motors continues to grow, CEO and founder Elon Musk says it may soon reach a shortage of batteries. The company is currently working with Panasonic, but Musk said that the “one of the bigger challenges for us is going to be lithium-ion cell production”.

GM’s 2015 Large SUVs Make Their Debut: The 2015 versions of the Chevrolet Tahoe, Chevy Suburban, GMC Yukon, and Yukon XL made their debuts at simultaneous debuts across the country. The all-new SUVs feature reworked exterior styling, including an aerodynamic profile and a new grille. GM says the interiors of the new SUVs will be more “upscale” compared to previous models.
Learn more about the Chevy Tahoe and Suburban
Learn more about the GMC Yukon and Yukon X

McGrath Auto has a large supply of new and used cars. Give us a call at 877-226-0908 to learn more about our tremendous service and unbeatable inventory.

We are proud to serve the hardworking people of Cedar Rapids and Iowa City!