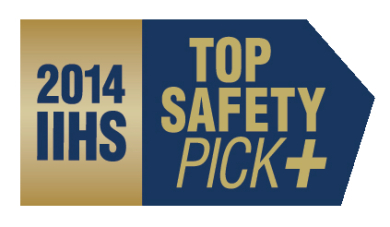 GM’s sibling small SUVs, the 2014 Chevy Equinox and GMC Terrain have proven themselves to be two of the safest SUVs on the road, earning the coveted Top Safety Pick+ honor from the Insurance Institute for Highway Safety.

The IIHS tested 9 different small SUVs from many automakers, including Honda, Ford, and Toyota, but only GM’s offerings earned a “Good” in the challenging small overlap test. 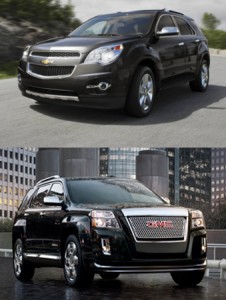 Both vehicles are available with forward collision alert technology and a complete system of airbags and other features that help protect both driver and passenger.

The Chevy Equinox is the 2nd Chevrolet vehicle to earn a Top Safety Pick+ designation in only a couple of weeks. At the end of March, the 2014 Malibu also earned to honor.

The IIHS tests also include front, side, roof strength, and head restraints. In order to receive the award, the Equinox and Terrain had to receive a “Good” in four out of five tests, and no less that “Acceptable” in the fifth tests.

About the IIHS Safety Tests

The IIHS evaluates almost every vehicle released, putting them through various collision tests that measure the effectiveness of airbags, restraints, and the overall vehicle structure. 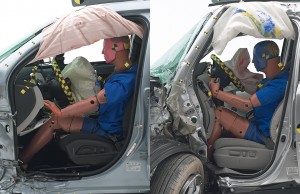 One of the most challenging tests is the small overlap test replicates a collision between the front driver’s side corner of a vehicle and a stationary object like a tree or utility pole. This test has been challenging for manufacturers, as the main parts of a vehicles crush-zone (the area designed to absorb collision energy) are bypassed.

One of the main components that the IIHS looks for is a vehicle’s ability to maintain the drivers space and not collapse into crash victim.

The Equinox held up very well in this test, holding its compartment shape and keeping the crash test dummy in front of the air bags and in a safe position.

Safe Vehicles for Drivers in Cedar Rapids and Iowa City

Call McGrath Auto today at 888-406-6073 to learn more about our tremendous inventory of reliable cars, trucks, and SUVs.

With six locations throughout the Cedar Rapids and Iowa City area, we have a great vehicle in your neighborhood.