With the introduction of the all-new Cruze compact sedan, Chevy’s aim wasn’t to simply dominate the segment, but to redefine it from the ground up. To achieve that goal, Chevy designed the Cruze to set new benchmarks for roominess, safety, performance, standard content and, in the case of the 2011 Chevy Cruze ECO model, fuel efficiency. Thanks to a host of design and engineering enhancements, the Cruze ECO boasts an EPA-estimated fuel economy rating of up to 42 highway mpg. That number is tops in the compact class, and Chevy got the job done without resorting to hybrid technology.

The result of intensive design research (including more than 500 hours of wind-tunnel testing), the new 2011 Chevy Cruze ECO’s 42 highway mpg rating rivals or betters the fuel economy of not only competition like the Toyota Corolla and the Honda Civic, but also many hybrid sedans – the Nissan Altima Hybrid and Toyota Camry Hybrid among them. By avoiding the cost and complexity of a gas/electric-hybrid powertrain, Chevy is able to sell the Cruze ECO for an MSRP of just $18,175.

Sweating the details in the wind tunnel led to a host of air-slicing aerodynamic modifications. Compared to other Chevy Cruze models, the ECO features a lower ride height, a deeper front air dam, a decklid spoiler and flat underbelly pans. The upper section of the ECO’s grille has fewer openings while the lower section features an electronically controlled “Active Shutter System,” which blocks airflow when it’s not needed. The result is impressive: The ECO boasts a drag coefficient of 0.298, lowest in the compact class and a 10 percent reduction from the rest of the Cruze lineup. 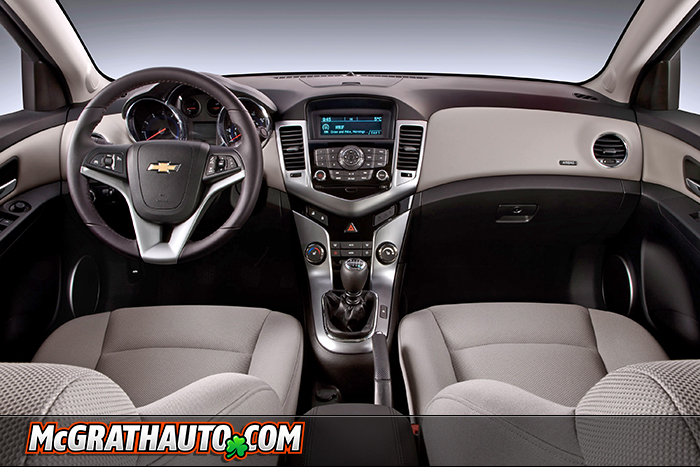 Designers also put the Cruze ECO through an exacting weight-savings program, which included the use of lighter 17-inch aluminum alloy wheels and a lighter rear-axle assembly. At 3,009 pounds, the ECO weighs about 125 pounds less than its Cruze stablemates. Switching to low-rolling-resistance tires was another major step toward making the ECO the most fuel-efficient non-hybrid sedan on the market.

A big contribution to the Cruze’s efficiency comes from its turbocharged 1.4-liter four-cylinder engine, also found in the Cruze LT and the Cruze LTZ. The entry-level Cruze LS gets a naturally aspirated 1.8-liter version of the ECOTEC four-cylinder. The 1.4-liter four features variable valve timing and makes 138 hp and 148 lb/ft of torque. In the ECO, the engine benefits from water-cooled bearings and an oil pump designed for higher efficiency.

The ECO’s standard six-speed manual transmission uses taller gearing, and works in concert with a light that flashes in the gauge cluster to tell the driver when to shift for maximum fuel economy. A six-speed automatic transmission is available on the ECO as well.

Early reviews have described the ride of the Chevy Cruze Eco as both “nimble” and “pleasantly smooth.” Thanks go to its fully independent suspension, electronic power steering and four-wheel ABS brakes. The standard StabiliTrak Electronic Stability Control System with Traction Control and rollover sensing inspires confidence at speed, as does the standard array of 10 airbags – including front- and rear-seat side and new front knee units.

While weight savings was a vital factor in its design, you can count on interior refinements normally found in more expensive sedans. You’ll also find seating-for-five spaciousness with cabin volume easily exceeding that of the Honda Civic and Toyota Corolla. 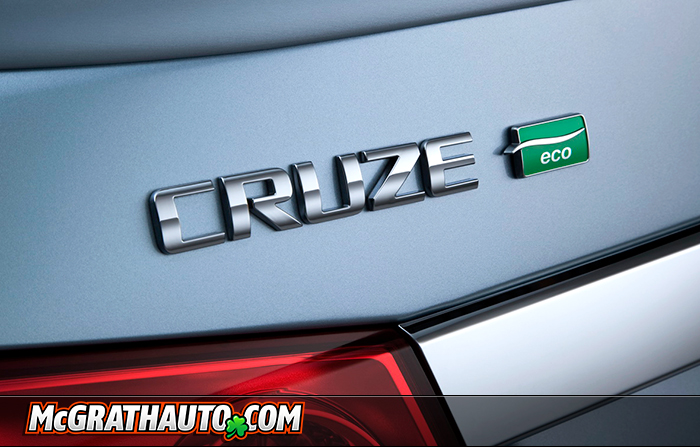 The ECO boasts many standard amenities the compact competition makes you pay more for – or doesn’t bother to offer at all. The list of standards includes a Driver Information Center, remote keyless entry, an AM/FM/CD/MP3 sound system with auxiliary audio input jack and XM Satellite Radio with a three-month trial subscription. You also get a tire-pressure monitor, a theft-deterrent system with engine immobilizer and OnStar with the Directions & Connections plan (including Turn-by-Turn Navigation and Automatic Crash Response) free for six months.

Chevy built the Cruze to redefine its segment from the ground up, proving to buyers that they can have much more – in refinement, room and performance – than they ever expected from a compact sedan. The 2011 Chevy Cruze ECO model gives you all that, plus non-hybrid fuel mileage unequaled in any segment. That’s no small feat for a small car.