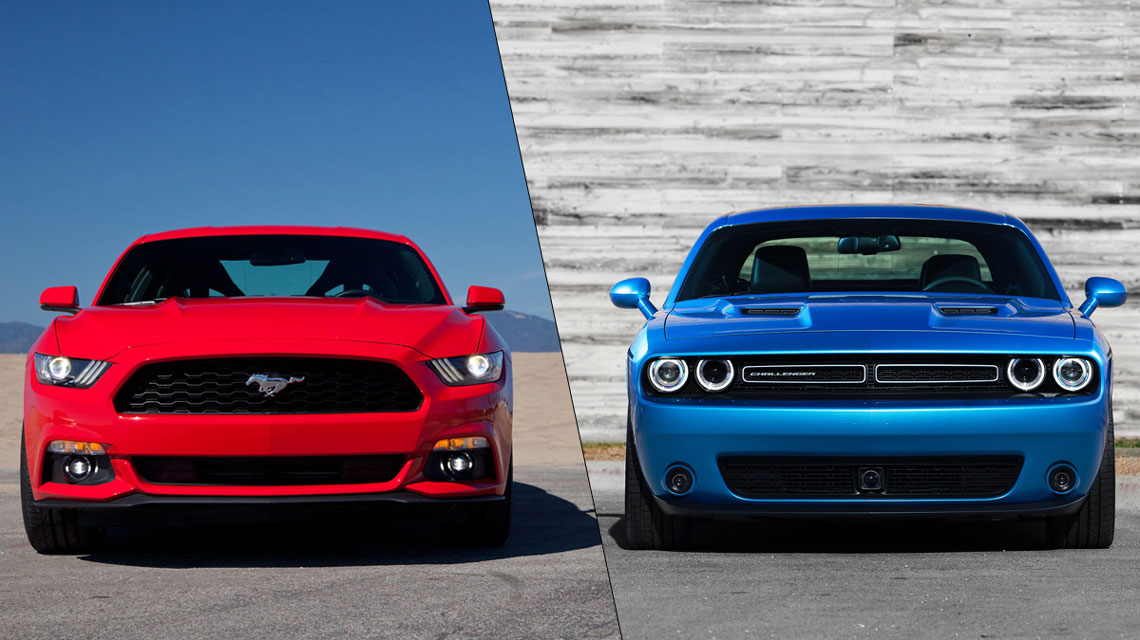 Ford Motors recently debuted the 2015 Ford Mustang at simultaneous events across the globe, including New York, Los Angeles, Shanghai, Sydney, and Barcelona. Ford hopes that the all-new Mustang will appeal to a global market- not just in America, but in Europe and Asia as well.

But how does the historic pony car compare to other American sports cars? The Dodge Challenger, for example, is one of the most aggressive, powerful, and uncompromising performance cars on the road. With a history of strong engines and head-turning designs, the Challenger is a great measuring stick for the 2015 Ford Mustang.

Engines: We’re talking about performance vehicles, so we have to talk about what’s under the hood. While there are little hard facts about the 2015 Dodge Challenger engine choices, there are a few interesting rumors floating around.

The biggest, (and most likely) rumor is that a newly-developed “Hellcat” V8 engine will become available in the Challenger. Automotive News has reported that the Hellcat engine could reach as high as 640 hp!

Compare the Hellcat with the biggest power source available in the 2015 Ford Mustang: the 5.0L V8. This engine is capable of 420 horsepower; not bad, but it could be more that 200 horses short of the top 2015 Dodge Challenger.

Currently, the Challenger SRT is available with a 6.2L Hemi that gives 470 hp and 470 lb-ft of torque, so even the current Challenger is more powerful than the upcoming 2015 Ford Mustang.

Also, Ford is putting a 2.3L four-cylinder engine in the 2015 Mustang. While this might be a nice choice for daily commuting, it shows Ford’s willingness to compromise on muscle car performance in the name of mass appeal.

Styling: As we said, the styling of the 2015 Ford Mustang is designed to appeal to a world-wide audience, and while this may be a good thing for Ford’s sales figures, it’s not necessarily a good thing for the American sports car enthusiast or the Mustang traditionalist.

Automotive magazine Road and Track appeared skeptical about the 2015 Ford Mustang’s exterior, saying that “sadly, there’s more than a hint of Taurus there, plus angular, Fusion-esque headlights”.

The styling of the Dodge Challenger, however, has never been honestly compared to family sedans and midsize commuters. In fact, Marty Padgett of The Car Connection writes that the “Dodge Challenger maintains the most loyal interpretation of old school muscle car design that’s available on the market today”.

So while the 2015 Ford Mustang is designed to appeal to an all-encompassing, global group, the Dodge Challenger is designed for true American muscle car enthusiasts.

Bottom line: In case you haven’t noticed the trend, the Dodge Challenger is clearly the right choice for muscle car enthusiasts and performance fans. If you want a nice commuter car with an historic name, then the 2015 Ford Mustang would suffice.

If, however, you want an uncompromising throw-back to the muscle car era, then the Dodge Challenger is the way to drive.

If you want impressive performance and a head-turning design, you need to take a free test drive in the Dodge Challenger.

Visit our location or call Pat McGrath Dodge Country today at 319-393-4610 to learn more about our available cars, trucks, and SUVs.