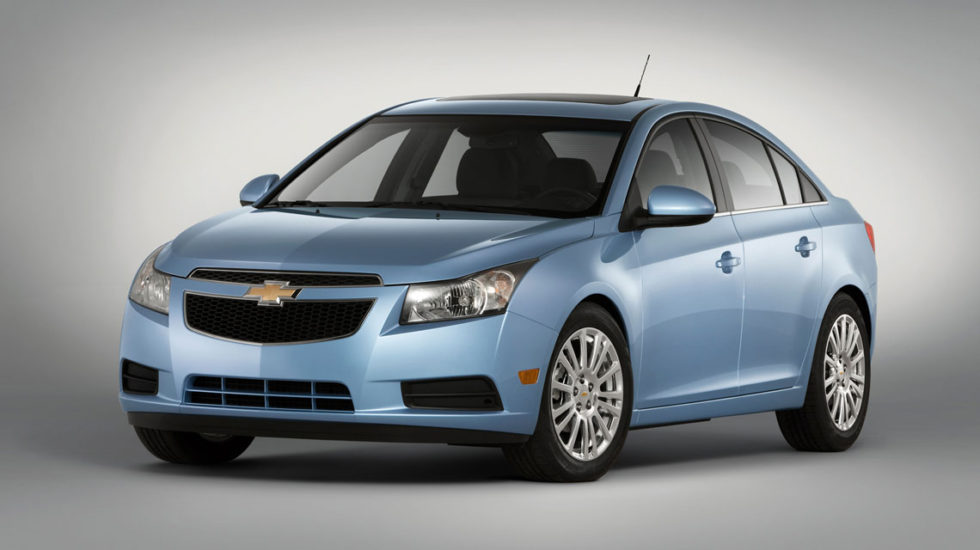 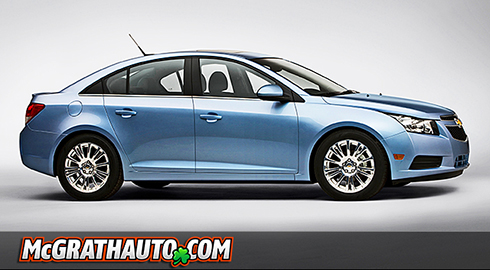 Hybrid-Like Fuel Economy Starts at $18,895; Goes on Sale in January

The official fuel economy numbers for the 2011 Chevrolet Cruze Eco are in and they’re good. Segment-leading good. It delivers an estimated 42 mpg on the highway (manual transmission models), with equally impressive city fuel economy of 28 mpg.

“Chevrolet Cruze continues to redefine the compact segment, offering class-leading standard safety features, upscale amenities – as well as hybrid-like fuel economy without the price,” said Chuck Russell, vehicle line director. “The Cruze Eco is in a league of its own and will challenge perceptions of the efficiency available in a more affordable non-hybrid.”

The Cruze Eco carries an MSRP of $18,895 (including destination charge). It goes on sale in January.

To achieve its segment-leading fuel economy, Cruze’s engineers focused on aerodynamic performance, mass optimization and powertrain enhancements. The refinements in each area paid big dividends towards the car’s overall efficiency, while providing engineers with valuable information to help enhance the efficiency of future Chevrolet models.

“We left no stone unturned or piece of sheet metal un-weighed,” said Russell. “Our engineers were comprehensive and thorough when it came to evaluating and modifying the aspects of the car’s performance that contribute to fuel economy.” 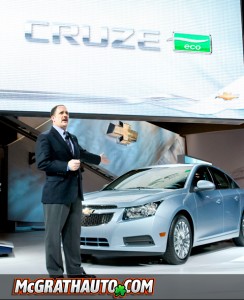 Aerodynamic improvements over non-Eco manual-transmission models contributed approximately 6 mpg to the Cruze’s EPA-estimated 42 mpg highway fuel economy. Many were developed and refined in more than 500 hours of wind-tunnel testing of the Chevy Volt, which shares a core architecture with the Cruze. Examples include the upper grille, which has more “closeouts” to improve aerodynamics, a lower front air dam extension, a rear spoiler, a lowered ride height and underbody panels that smooth airflow beneath the car.

The Eco model also features an all-new technology in the compact segment: a lower front grille air shutter that closes at higher speeds to reduce aerodynamic drag and opens at lower speeds to optimize engine-cooling airflow. Another contributor to reduced drag is the use of ultra-low rolling resistance 17-inch Goodyear tires (used with lightweight wheels), which are also used on the Volt.

As a result of the aero enhancements, aerodynamic drag was reduced by 10 percent over a non-Eco model, with a coefficient of drag of 0.298. That places Cruze at the top of the class for mainstream compact cars.

More than 42 changes were made on the Eco to reduce weight. It weighs in at 3,009 pounds (1,365 kg), compared to the 3,223 pounds (1,462 kg) of the Cruze 1LT. The diet program for the Cruze challenged engineers to look at all aspects of the vehicle’s construction, including hundreds of weld flanges on the vehicle. They were reduced 1 mm to 2 mm in length, which saved several pounds, while the sheet metal gauge thickness was reduced by about 0.1 mm in select components. This saved weight while preserving structural integrity.

Chevy Cruze Eco is powered by power-dense Ecotec 1.4L turbocharged engine and a standard six-speed manual transmission. The transmission’s gearing is optimized for the model’s specific 17-inch wheel/tire combination and includes aggressive ratios for first and second gear coupled with a highly efficient, “taller” sixth-gear ratio for highway driving. That means engine rpm is reduced on the highway, which in turn reduces fuel consumption. A six-speed automatic transmission is available, with EPA-estimated fuel economy ratings of 26 city and 37 highway.

The Ecotec 1.4L turbo’s power ratings are 138 horsepower (103 kW) and 148 lb.-ft. of torque (200 Nm) between 1,850 rpm and 4,900 rpm. The wide rpm range for the maximum torque – a specific trait of turbocharged engines – helps the engine deliver a better driving experience and performance. The turbocharger is integrated within the exhaust manifold, for reduced weight and greater packaging flexibility.

The engine also features premium design elements that give it world-class smoothness and durability while also contributing to the Cruze Eco’s lower curb weight. They include a cast iron block with a hollow frame structure, hollow-cast camshafts and a plastic intake manifold.

As a result of aerodynamic improvements, mass reduction and powertrain optimization, the Cruze Eco offers the best fuel economy in the compact segment, while delivering hybrid-like fuel economy without the hybrid price. The following charts show how it compares with primary competitors and popular hybrids.