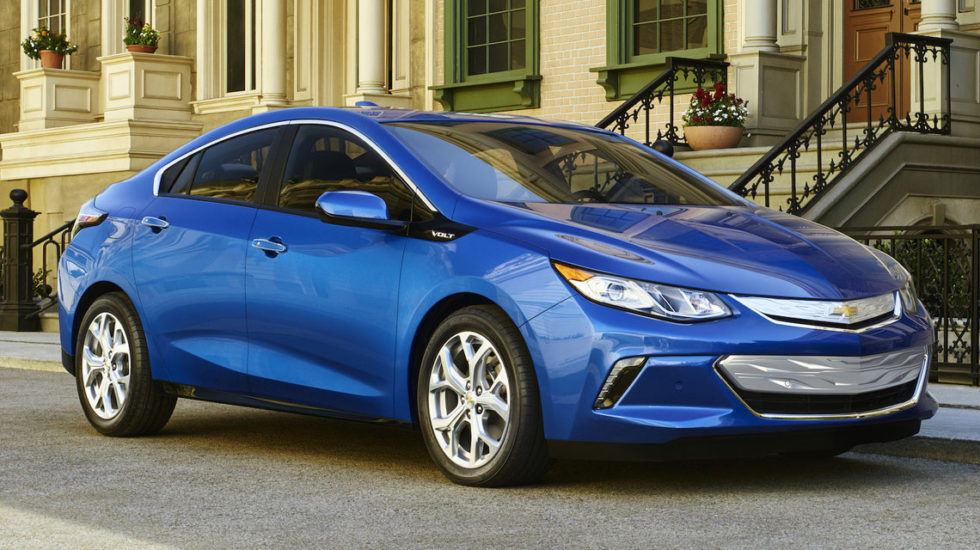 Chevy’s all-new Volt is electric, in more ways than one. It’s the most groundbreaking vehicle to ever roll off the automaker’s assembly line.

As Chevy’s first ever mass produced extended range plug-in electric vehicle, the 2011 Volt (starting MSRP $40,280 with an available federal tax credit of up to $7,500 that drops that figure to as low as $32,780), delivers a smart, fun-to-drive, and practical-to-own car that’s neither perpetually tethered to a power outlet, nor limited by low maximum distance barriers (like Nissan’s Leaf).

Chevy’s newest spurns bland, predictable styling in favor of sleek, aerodynamic modernism (in fact, with a drag coefficient of just 0.287, it’s one of the most aerodynamic Chevys ever built). Sophistication reigns in the Volt’s well-sculpted hatchback design, infused with attractive chrome pieces, standard 17-inch aluminum wheels, heated side mirrors and a rear spoiler.

But it’s the vehicle’s advanced powertrain, and the promise of never-before-seen fuel economy that makes the Volt so appealing. And rightly so; Chevy’s brainchild breaks the mold with an incredibly unique and versatile Voltec propulsion system, consisting primarily of a long-life battery and electric drive unit, and backed occasionally by a 1.4-liter gas engine.

Though remarkably complex and technically advanced, the fundamental workings of Chevy’s system are actually quite simple. Under normal circumstances, the Volt’s state-of-the-art, T-shaped, 16-kWh lithium-ion battery (backed by an eight-year/100,000-mile limited warranty) sends juice to a 111-kW electric drive unit, which generates 149 hp and anywhere from 25-50 miles of pure electric power. Essentially, depending on the manner and conditions in which you drive, the Chevy Volt is capable of traveling up to 50 miles, and up to 100 mph without using a single drop of fuel or expelling a single molecule of exhaust.

Should your daily driving needs exceed that, or if the massive battery’s energy reserves are sufficiently depleted, the Volt extends its range with the help of a 1.4-liter gas generator, which kicks in another 84 hp and, working in tandem with the electric drive unit, up to another 310 miles of range. While regenerative braking helps to recharge some of the battery’s depleted juice, primary recharging is completed through a dedicated 240V charging station (a full charge takes just four hours) or through a normal 120V outlet, (which takes about 10-12 hours, and can be performed on a schedule of your choosing). So, while the Volt doesn’t necessarily eliminate trips to the gas station entirely, Chevy’s convenient and practical system should allow most Americans to drastically lower their fuel expenditures, and easily fully recharge for as little as $1.50 per day (depending on your electric rates).

Are you interested in the new 2011 Chevy Volt? If so, feel free to email us at sales@mcgrathauto.com or call us at 319-393-6300 to schedule a test drive! Our helpful and friendly sales staff is ready and eager to assist you in your search for a new vehicle!

The Volt runs smooth and quiet no matter where its power derives from. Chevy’s standard StabiliTrak electronic stability control system joins with a rock-solid body structure (composed of advanced steel), low center of gravity and MacPherson strut-type suspension setup to deliver a ride that’s as enjoyable as it is efficient. And with standard antilock brakes, eight standard airbags, OnStar (with automatic crash response) and safety belts with a pair of pretensioners, the Volt is one of the safest rides in its class (though, realistically, it’s in something of a class by itself).

The Volt’s sizable battery runs straight through the middle of its rear seats, making the plug-in a comfortable four-seater instead of the prototypical five. In terms of interior amenities, what you see is predominantly what you get (the Volt is offered in a single trim level), though what you get is an impressive array of standard features right off the bat. An available Premium Trim Package adds everything from heated leather seats (with different, selectable color combinations of trim and accents) to a leather-wrapped steering wheel, but generally, the Volt is well equipped with power options, climate control, a remote starter and XM Satellite Radio.

The technologically advanced cockpit houses a pair of seven-inch color LCD screens, the first of which sits in front of the steering wheel in place of a conventional gauge setup, and a second that sits prominently atop the attractive and intuitive center stack, (which itself resembles an over sized MP3 player with touch-sensitive controls). In addition to graphic readouts on your vehicle’s status, performance and efficiency, the stack’s touch-screen also houses the Volt’s standard navigation system. The integrated Bose audio system, (which uses 50 percent less power to operate than conventional systems) is backed by 30GB of internal music storage, as well as USB and Bluetooth connectivity. Through OnStar MyLink™, the Volt’s systems and status can even be checked and changed through a special app on your smartphone.

Electric. There are few better words to describe the innovative new 2011 Chevy Volt.