Large SUVs are an American staple. With power, space, and comfort, these vehicles have the versatility to meet the many needs of drivers in Cedar Rapids and Iowa City.

For years, Ford and Chevy have been battling to create the best large SUV on the road. While the competition has benefited both automakers, it has mostly benefited the driver, who gets the results of a never-ending competition for SUV superiority.

For 2015, both automakers have redesigned their large SUVs. So which one is superior, the 2015 Ford Expedition or the 2015 Chevy Suburban?

Take a look at our comparison and see why the Chevy Suburban, thanks to two key categories, trumps the 2015 Ford Expedition. 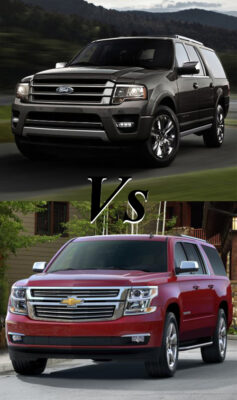 The interior of the 2015 Chevy Suburban is the area of the vehicle that received the most improvements and upgrades. Premium materials and high-quality technology create a driving experience that keeps you fully connected. Drivers will enjoy hands-free connectivity, while passengers can enjoy the available Blu-ray entertainment system and other premium materials. Even The Car Connection commented on the new Suburban’s interior, adding the “Much-improved interior” to its Likes category.

The 2015 Ford Expedition also made upgrades to the interior, but in this case, The Car Connection seemed doubtful that the changes would be enough to make the SUV a standout. Under the Dislikes category, the reviewers wondered if “the interior trim improved enough”.

Fuel-economy:
The Chevy Suburban may not be a fuel-sipping subcompact, but that doesn’t mean it can’t offer excellent fuel economy for the large SUV segment. With the 5.3L EcoTec V8, the 2015 Suburban equipped with 4WD is rated 15 mpg city and 22 on the highway. Using intelligent technology like variable valve timing and active fuel management, the Chevy Suburban helps you get the most from every gallon of gas.

The 2015 Ford Expedition does make some much-needed improvements in fuel-economy, but it looks like it won’t quite match the numbers of the Suburban. According to The Car Connection, the 2015 Expedition will have a 2 mpg boost from the previous model (13 city, 18hwy). This means a 4WD version will likely get 15 city and 20 highway, keeping the 2015 Expedition just behind the Suburban.

When it’s all said and done, the 2015 Ford Expedition puts up a strong challenge, but simply can’t quite reach the higher standard set by the Chevy Suburban

Call Pat McGrath Chevyland today at (319) 393-6300 to learn more about our complete inventory of SUVs, including the Chevy Suburban.

Stop by today to take a free test drive and we’ll help you find the right SUV at the right price.