Exciting news has been announced for Korean Brands, with a significant year-over-year improvement Kia has been named top among non-premium makes in J.D. Power 2015 U.S. Initial Quality Study.

What this study reflects is the problems experienced by the different US models by vehicle owners during the first 90 days of ownership.  Korean brands lead the industry in initial quality with the largest margin ever, averaging 90 PP100, which is an 11 PP100 difference of improvement from 2014! Another historical shift was with the Japanese brands taking a dive to European brands and tying with domestic makes, this is the first time to ever happen in this study due to Japanese brands never earning a rating below initial quality within industry averages. Only 4 of the 10 Japanese brands included in the study post an improvement. 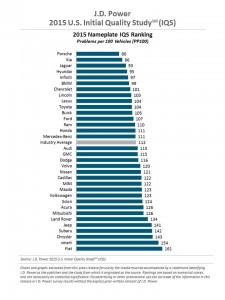 “This is a clear shift in the quality landscape,” said Renee Stephens, Vice President of U.S. Automotive Quality at J.D. Power. “For so long, Japanese brands have been viewed by many as the gold standard in vehicle quality. While the Japanese automakers continue to make improvements, we’re seeing other brands, most notably the Korean makes, really accelerating the rate of improvement. Leading companies are not only stepping up the pace of improvements on existing models, but are also working up front to launch vehicles with higher quality and more intuitive designs.”1

This study is now in its 29th year and is based off of 233-question detailed survey that is divided into eight problem categories. This years U.S. Initial Quality Study is based on more than 84,000 purchasers and lessees responses to the survey. Their answers were based off of the vehicle ownership after 90 days, and was ran this year between February and May.

Porche ranks the highest in initial quality for the 3rd year in a row, however Kia follows rank earning a 20 PP100 improvement since 2014. This marks the first time in history that Kia has led all non-premium makes in initial quality!

In addition, Kia Motors Corporation’s Kwangju Plant 1, Korea, received the Gold Plant Quality Award in the Asia Pacific Region. This plant is responsible for the production of the ever popular Kia Soul. Which then brings up that the Kia Soul was the highest ranked MPV (multi-purpose vehicle) in that no other model in this segment performed above the segment average! Lastly Kia also brought home the category of highest ranked Midsized SUV with it’s Sorento surpassing the Hyundai Santa Fe, and the Chevrolet Traverse!