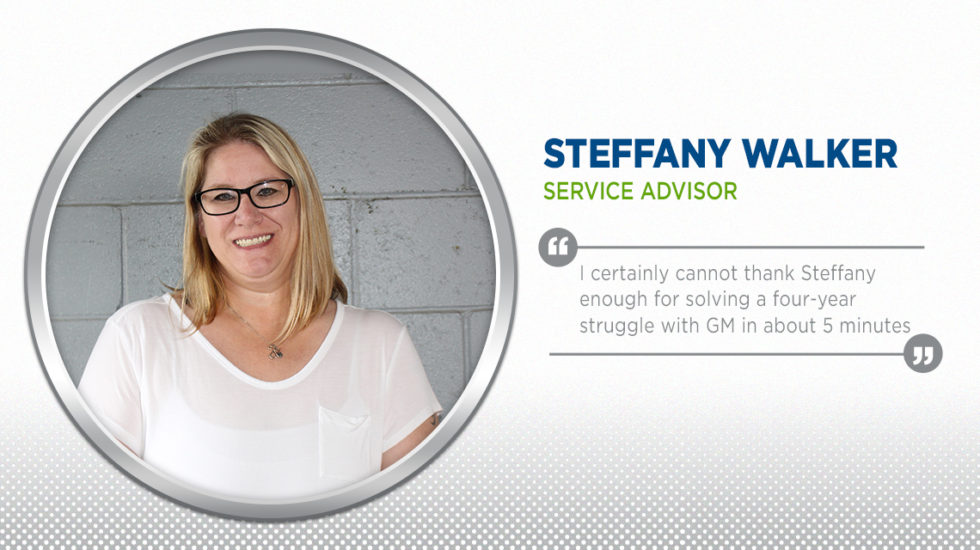 We wanted to take a moment to recognize Steffany Walker, a Service Advisor at McGrath Chevrolet of Dubuque for delivering on the promise to exceed customers expectations!

“THANK YOU, THANK YOU, THANK YOU to Steffany, Service Advisor; and McGrath Chevrolet, Dubuque.  I was contacted by the Oldsmobile Division of General Motors about four years ago regarding a recall due to the accidental shut-off of the ignition switch because of the excess space in the keys which they could not repair them as directed by the recall and that I would have to buy new keys.  Oldsmobile had assured me there would be no charge to me.  I decided to inform them of the problem and was informed that I would have to replace the keys.  I didn’t do it and soon started getting letter, postcards, and phone calls reminding me to get the repair.  At one point I informed them that I had no intention of purchasing new keys and was assured I had to replace them. One caller agreed that it was ridiculous what was transpiring and since I did not do a lot of driving, he would take me off the notification list.”

“A month or two later, another phone call and was advised that I should not have been told that I did not have to do it and to go ahead and get the repairs.  Another called told me to go around to other GM dealers and try to find one that would replace the keys.  Another caller put me in contact with the then Bird Chevrolet dealership and was told by their parts person that since my keys were plain metal with no cover they were after-market keys and therefore the recall did not apply to me.  They continued bugging me and after two continuous days of phone calls connected me with McGrath.”

“I was informed that I would have to bring in the keys and so an appointment was made and I visited your location and was assisted by Steffany.  After only a few minutes she informed me that they would replace the keys.  It appears that McGrath absorbed the bill for this repair and I certainly cannot thank you and Steffany enough for your solving a four-year struggle with GM in about five minutes.  I shall continue to sing your praises.  Dealing with GM reminded me of being in the Army, the right hand does not know what the left hand it doing.”