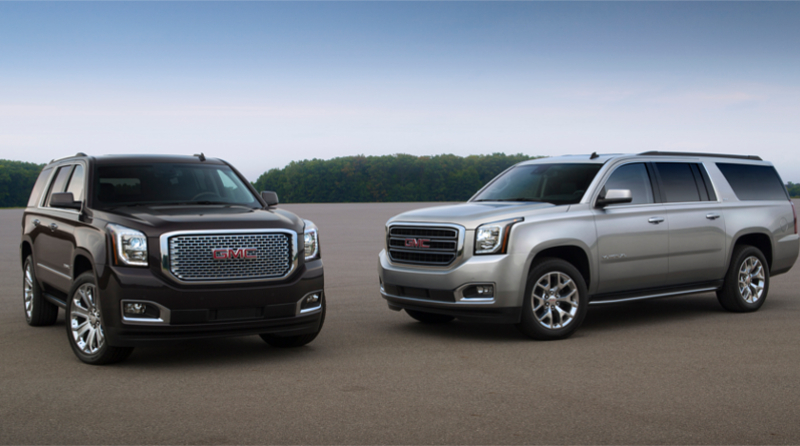 The next generations of GM’s popular SUVs have made their debuts!

The General Motors’s sport utilities, are getting the same platform as the recently launched full-sized trucks, but the design and interior will be completely unique.

The exterior design is more aerodynamic, and GM is using new sheet metal for a blockier, more chiseled look. Unlike the 2014 models, the new Suburban, Tahoe, Yukon, and Yukon XL will not share doors or side panels with the Chevy Silverado and GMC Sierra.

Noticeable changes in the new SUVs include a heavier use of chrome accents and swept-back front headlights that mold into the front fenders.

GM has also implemented inlaid doors, which fit into the body side openings rather than overlapping the top of the body.

“We’ve engineered the Yukon and Yukon XL from the ground up, building on a strong legacy of capability to take them to the top of the segment with exceptional refinement and purposeful technology.”
– Tony DiSalle, Vice President of GMC Marketing

Although official numbers are not out yet, GM promises that the 2015 Chevy Tahoe and 2015 Chevy Suburban will be more powerful and more capable than ever before.

American SUVs Made in the USA

General Motors has announced that the 2015 Chevy Tahoe and 2015 Chevy Suburban will be built in Arlington, Texas.

Buyers looking for the Chevrolet SUVs will be able to find them in Cedar Rapids around the first quarter of 2014.

Chevy Tahoe and Suburbans for Cedar Rapids and Iowa City

If you are in the market for a high-quality SUV, contact us to learn more about our large inventory and great prices.

We have the right SUV for you. Fill out a Contact Form and we’ll reach out to you with more information.

Pat McGrath Chevyland is a proud member of the McGrath Auto group.