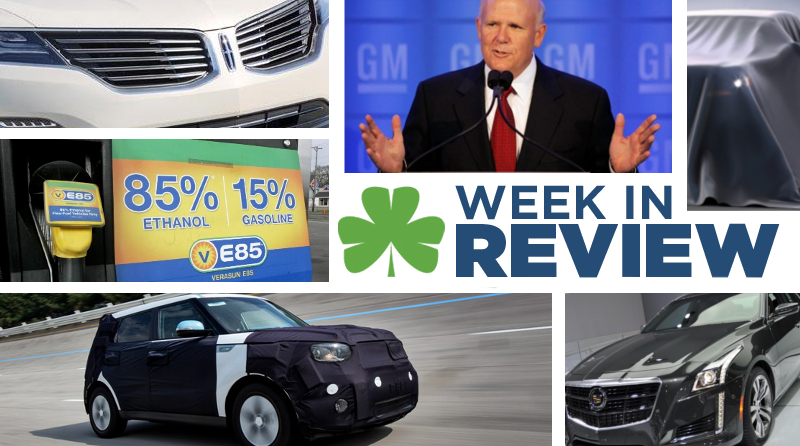 This week’s top stories cover it all, from alternative fuel innovations to potential changes at the top of General Motors.

Find out what the NHTSA is doing to curb a tragically growing trend, and how Cadillac’s new marketing head hopes to put their design at the forefront.

All Electric Kia Soul Under Development: Kia Motors released a statement saying the all-electric Kia Soul is now being developed. The vehicle is expected to have a range of 120 miles and deliver 109 hp and 210 lb-ft of torque, making it an ideal vehicle for city commuters.

New Marketing Strategy for Cadillac: Although Cadillac’s new global marketing head doesn’t officially start until January 1st, he is already sharing his thoughts about GM’s luxury brand. Uwe Ellinghaus said he wants to sharpen Cadillac’s brand identity around the exceptional designs found in all of Cadillac’s vehicles, saying that current marketing has been too vague.

Kia Helps Expand Driving Education Program: In an effort to educate more teenage drivers, Kia and B.R.A.K.E.S. (Be Responsible And Keep Everyone Safe) are expanding their hands-on defensive driving program to new cities across the U.S. The program gives teen drivers the chance to get behind the wheel in simulated scenarios, including control and recovery, distracted driving and panic stops.

Lincoln Jumping into Luxury Crossover Segment: In an all-encompassing effort to re-energize the slumping Lincoln brand, Ford Motors announced that it would display the Lincoln MKC at the LA Auto Show. Lincoln hopes that the small premium SUV will compete with the Audi A3 and Mercedes-Benz CLA. Lincoln wants to bounce back after low sales and a rocky launch of the MKZ sedan.

Ethanol Debate Continues: Pro-ethanol lobbyist and opponents continue to debate the mandated amount of ethanol in US fuel blends. Reports say the EPA may reduce the amount of required ethanol due to decreased fuel demand, which would be the first reduction since the mandate began in 2005.

Chrysler Creates CNG Innovation: The Chrysler Group announced it has created a new storage technique for Compressed Natural Gas. The design mimics a human lung by using smaller compartment to store the fuel, allowing designers to be more flexible with the storage tank’s shape. Instead of one large tank in the trunk or bed, the tank can now be shaped to fit into smaller spaces and crannies through the vehicle.

General Motors CEO Leaving? Reuters reported this week that GM CEO Dan Akerson may retire in 2014. The news source sited “people close to the matter”, saying that although Akerson has given no formal announcement, the 65 year old could retire by the end of next year.

NTHSA Looks to Reduce Highway Fatalities: Highway fatalities in the US are up for the first time since 2005. The number of deaths rose 3%, prompting the NHTSA to create the “Significant and Seamless” initiative, which calls for the auto industry to implement safety technologies like mandatory seatbelt-ignition locks, which require seatbelt use before the car will start.
Side note – According to the Iowa DOT, 267 people have lost their lives in Iowa traffic accidents this year. The Iowa DOT also tracks a “Life Toll” statistic, which estimates the number of people who escaped serious injury or death because they were buckled up. The current Life Toll for 2013 is 174.
McGrath Auto would like to remind everyone to drive safely and always buckle up.

We have a large inventory of new and used cars, contact McGrath Auto to learn more!