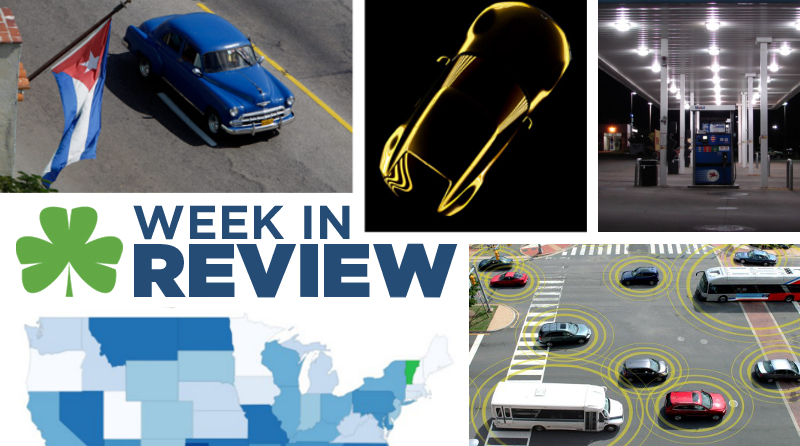 The automotive industry was apparently visited by the ghost of Christmas future, as this week’s review  includes upcoming upgrades, hints at new regulations, and a possible sports car from Kia.

This week’s review includes a large investment from General Motors, and a step forward for Cuban car-buyers.

Find out how Iowa drivers compare to the rest of the nation, and what Kia has in store for the near future.

GM Investing $1.3 Billion in Upgrades: General Motors announced they will invest $1.3 billion to upgrade facilities across three states. The investment will create or retain around 1,000 jobs while producing more fuel-efficient vehicles. GM has invested $10.1 billion in its operations since 2009. Learn more about the GM investment here.

Iowa Has Some of the Best Drivers: Car Insurance Comparison released the results of a study that measured categories like traffic citations and fatalities to rank the states and find the best drivers. Iowa came in as #9 for the best drivers, while Louisiana was found to be the worst.

Cuba Car-Buying Revolution: For the first time since 1959, Cuban car-buyers can purchase vehicle without government permission. Thousands of co-ops in Cuba are expected to benefit from the regulation, which would make new and used cars more accessible. Cars built before 1959 have always been free for sale, which is why so many old cars roll on Cuban streets.

NHTSA to Roll out Smart Car Plans: According to a report from The Detroit News, outgoing NHTSA chief David Strickland will announce the agency’s plan for vehicle-to-vehicle communications and advanced braking systems. It is unclear if the agency will pursue vehicle regulations or simply add the features to its New Car Assessment program.

IIHS Results Released: The IIHS released its results for current cars, with three vehicles from the Chrysler Group, the Dodge Dart, Avenger, and Chrysler 200, honored as Top Safety Picks. The IIHS tests include side impacts, whiplash, and roof strength.

Kia to Unveil New Sports Car Concept: Kia also announced that they will reveal a new concept car at the 2014 North American International Auto Show. A press release from Kia says the “sports car is intended to turn heads while delivering superb driving enjoyment on both road and track”.

Gasoline Engines May be Here for a While: According to a new Energy Department report, gasoline powered combustion engines are here to stay. Currently conventional engines make up 82% of the vehicles on roads, and the department expects that number to drop to only 78% by 2014.

Whether you are looking for a great car or great service, you’ll find them both at McGrath Auto.

Contact McGrath Auto to learn more about our new and used car inventory.