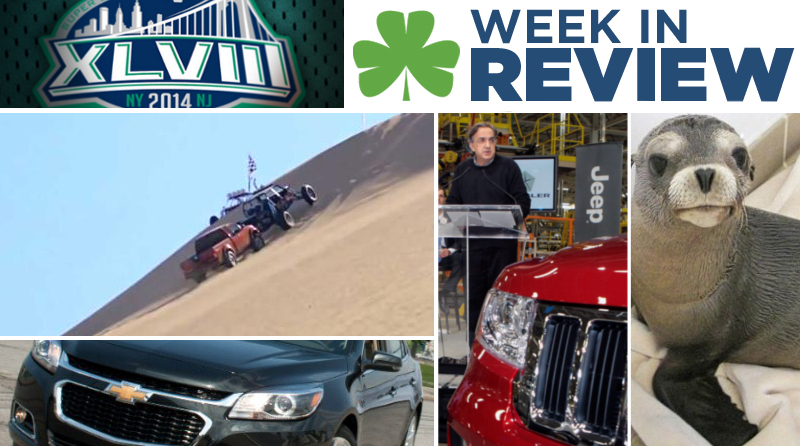 Not even a cold winter can keep the most interesting industry in the world from making news.

This week’s review includes advertisements getting ready for the Super Bowl, while another gets pulled for misleading content.

Chevy Continues Safety Streak: The Chevy Malibu earned a perfect 5-Star Safety Rating and the Chevy Spark became the only small vehicle to earn an “Acceptable” rating from the IIHS, scoring better than the Ford Fiesta, Honda Fit, Nissan Versa, and Toyota Prius and Yaris. The Malibu joins the Silverado and Impala as 5-Star rated Chevy vehicles.

Jeep a Top Priority for Sergio: After record sales of nearly 732,000 units in 2013, Jeep is poised for an even better year in 2014 according to leadership. With high-quality products and a broad portfolio, Chrysler Group CEO Sergio Marchionne and Jeep brand president Mike Manley say the goal for Jeep is 1 million units sold in 2014.

Nissan Agrees to Stop Running Misleading Ad: Nissan and its ad agency TBWA Worldwide have agreed to stop running a television commercial that has been deemed misleading by the FTC. The 30 second spot shows a Nissan Frontier pushing a stuck dune buggy up a steep desert slope. To film the spot, both the truck and the buggy were pulled up the hill using cables.

GM’s Barra to Stay the Course: In a round table discussion with auto journalists, recently hired GM CEO Mary Barra has said that one of the major plans for her tenure is to follow the path forged by former CEO Dan Akerson. She added that she has some of the best product developers in the industry, which will help her accelerate GM’s future growth.

Kia Soul Donated to Marine Mammal Outreach: Kia Motors teamed is teaming with the Pacific Marine Mammal Center in California, donating a decorative Kia Soul that will be used to help rescue and rehabilitate marine mammals like seals and sea lions. Kia will also participate in beach cleanup and sponsor recovery efforts.

Detroit Auto Show Wrapping Up: The North American Auto Show in Detroit officially ends this weekend after two weeks of new models, stunning concepts, and technological advancements. The biggest show in the country drew the attention of the entire industry, including automakers, journalists, enthusiasts, and everyday drivers.

We want to help you find the right car at the right price, so give us a call today!