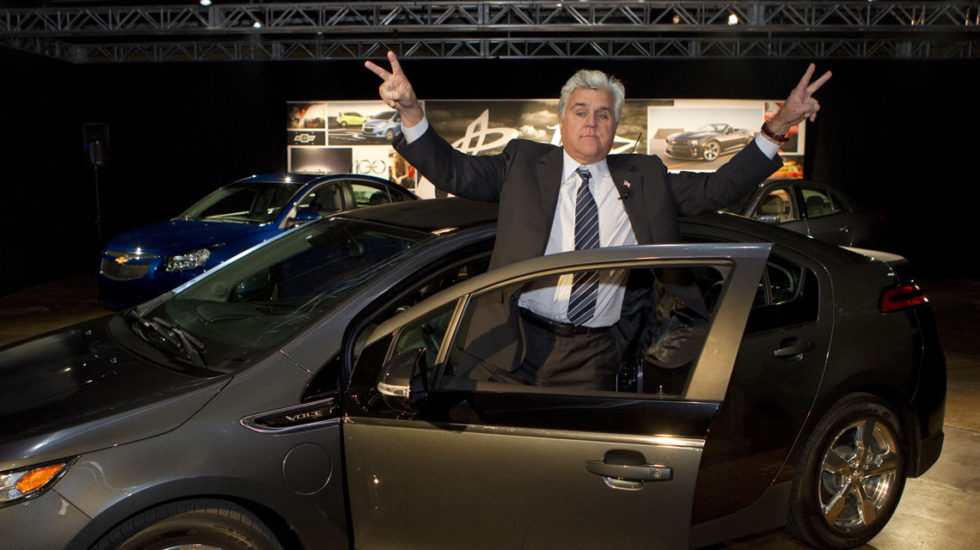 Stand-up comedian, late night talk show host and car enthusiast, Jay Leno, took delivery of one of the first production models of the long awaited Chevy Volt to roll off the assembly line a few weeks ago.

The Chevy Volt, a plug-in hybrid electric vehicle that was officially introduced at General Motors’ Detroit/Hamtramck assembly plant on November 30th, 2010, had Jay initially skeptical and he even touted a few months back that he would not be one of the first people in line to buy the new electric. Since then, Jay seems to have changed his tune, picking up his Volt at a Chevrolet dealership in Northridge, California, making for a grand event attracting local and national press.

Not only has Jay become one of the first owners of the fascinating new Volt, it seems he can’t pry his grip from the wheel. Logging 250 miles in commutes to his television studio, his enthusiasm for the new electric is evident.

The Volt is electric when you want it to be, and gas when you need it to be. I’ve had it for less than a week, and I’m driving it every day.

“I’m impressed from a quality point of view, I had a club date that was 60 miles away the other night, and the car just switched to gas when the electric was depleted, with no range anxiety, no problems — the Volt just becomes a regular car, without any compromises. I really like the regenerative braking, too.”

Mr. Leno remains on the fence about some auto-maker’s efforts in the electric vehicle market, “I don’t get the Nissan Leaf with its 73 miles of range. To me, for a new technology to succeed, it can’t just be equal to something else, it has to be better. With a lot of electrics, they take out the rear seats, then make them heavier and more expensive.”

But he seems to think the Chevy Volt is an impressive and forward-thinking step in the electric car evolution.

Read More about the Chevy Volt: