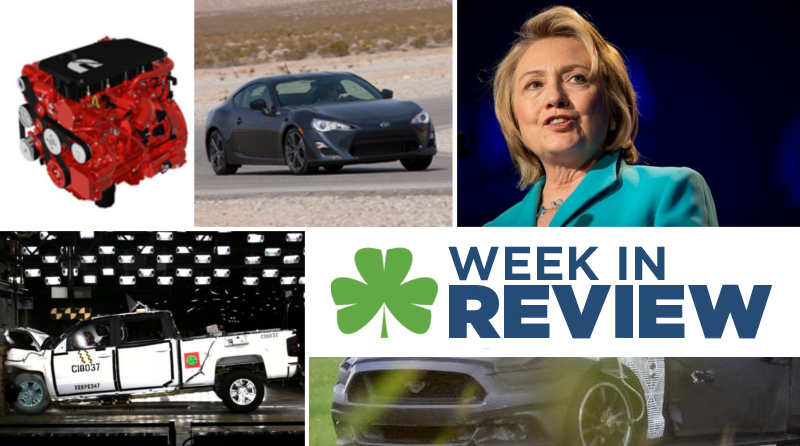 The world keeps turning, and the automotive industry keeps giving us something to think about.

This week’s Automotive Week in Review has something for everyone, from heavy-duty diesel engine drivers to fans of the youth-oriented Scion brand.

Find out how Ford is putting faux performance into the next Fiesta, and what the NADA has to say about their controversial keynote speaker.

Toyota Gives Dealers Permission to Ditch Scion: Despite the best of efforts, the Toyota Motor Company has been unable to revive the once promising Scion brand, prompting the automaker to allow its dealers to drop Scion without penalty. Sales for the Scion brand are down 9% year-to-year, according to Forbes.com.

Cummins Diesel for a Nissan Truck: Nissan is attempting to challenge the Ram truck with a Cummins diesel of their own. Nissan employees say the modified Cummins will be put in a fullsize Titan pickup, giving the vehicle 300 hp and 550 lb-ft of torque.

Sierra and Silverado Set New Safety Benchmark: Sibling vehicles, the 2014 Chevy Silverado and 2014 GMC Sierra, received a perfect 5-Star Safety Rating from the NHTSA. The vehicles become the first trucks to ace the tests since the studies were updated in 2011.
Learn more here

2015 Mustang Spy Shots Swarm the Internet: The automotive world was buzzing with spy shots featuring a vehicle that was all but officially the 2015 Ford Mustang. While the test vehicle shown in the photos was still covered in camo, the front was visible, giving a clear view of the potential grille and front design.

NADA Defends Choice for Hillary as Keynote Speaker: This week, NADA Chairman David Westcott reiterated the group’s commitment to have Hillary Clinton as the keynote speaker at a major convention in January, saying they wanted a well-known, interesting speaker. While the Clinton announcement stirred controversy, leaders reminded members that it has a history of political speakers, including Pres. Clinton, Condoleezza Rice, and both Bush presidents.

Chevy Impala and Kia Cadenza Outrank Toyota Avalon: When Consumer Reports released their ranking for the best large sedans, many experts were surprised to find the perennial favorite, the Toyota Avalon, bumped back to #3 behind the 1st place Impala and 2nd place Cadenza.

Artificial Sound Revving the Ford Fiesta: In an attempt to make the Ford Fiesta ST seem more like a sports car, the automaker is artificially adding engine noise to the cabin by pumping sound via a “sound symposer”. This system does nothing to actually boost performance, but Ford hopes young performance enthusiasts will be attracted to the fake engine sound.

The State of Car Ownership Costs: Using factors like gas prices, repairs costs, and insurance premiums, Bankrate released the results of its study tracking the cost of vehicle ownership by state. The group found that Georgia is the most expensive state, while Oregon is the most affordable. Iowa ranked 33rd for most expensive.
See the complete rankings

If you are in the market for a new or used car, truck, or SUV, work with McGrath Auto, the area’s trusted source for high-quality, reliable vehicles.