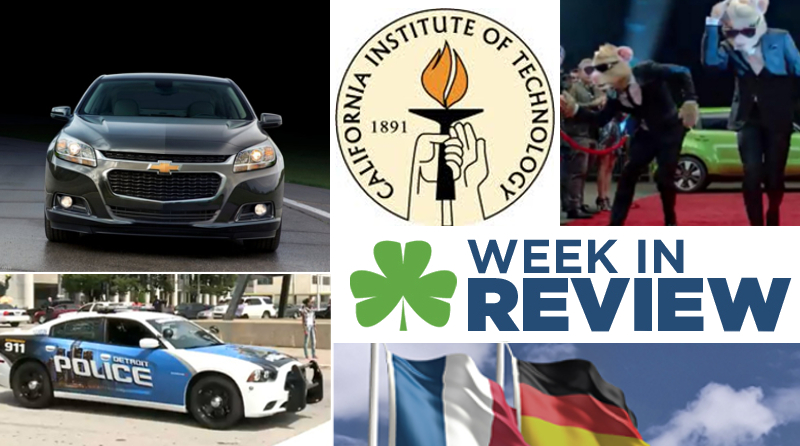 It was a hot week in Iowa, and  the automotive industry wasn’t too different.

This week’s top automotive stories include slimmed-down Hamsters,  fuel-from the sun, and German-French relations, and insights on how young car-buyers do their shopping.

Find out who’s going back to the Super Bowl, and which city’s police department received a big donation by reading more.

Working for Fuel from the Sun: Researchers at the California Institute of Technology are working to create energy by harvesting sunshine and turning it into liquid car fuel. The process would combine the sun’s energy with carbon dioxide, similar to the photosynthesis process found in plants.

General Motors is Doing the Super Bowl Shuffle: After taking last year off, General Motors has said it plans to get back into Super Bowl commercials. In particular, GM’s top brand Chevrolet will be prominently featured. With 12 new Chevy cars and trucks being launched between mid-2013 and the end of 2014, Chevrolet CMO Tim Mahoney said it’s a perfect time to get back into the Super Bowl.

Global Leader in Environmental Facilities: Speaking of General Motors, the company announced this week that it has 9 more ENERGY STAR compliant facilities, bringing its global total to 63, more than any other company in the world. GM is participating in the EPA’s voluntary challenge to reduce energy by 10%.

3 Dealership Visits for Young Shoppers: According to an Autotrader study, car buyers 16 to 32 years-old make an average of 3.1 car dealerships visits per purchase. Compared to the baby boomer generation, which makes an average of 1.9 visits, younger buyers apparently enjoy browsing lots more than older buyers and are less loyal to specific brands and dealerships.

Mercedes-Benz Coolant Heating Up Foreign Relations: A French ban on new German-built Mercedes-Benz cars using a controversial coolant was lifted by France’s highest court. The coolant is said to be environmentally harmful, but German leaders challenge the findings and worry that strict emission rules from the European Union will harm sales and the German economy. The Wall Street Journal reports that tighter emission standards would favor small-cars made in France.

Police Pursuit Chargers Donated to Detroit: The embattled city of Detroit received a much-needed gift, as the Chrysler Group donated 5 police car versions of the Dodge Charger, with a total of 33 coming in the near future. Chrysler and other companies will help donate a total of 123 police cruisers and EMS vehicles to the city. Learn more here

2014 Malibu is First with Fuel-Saving Standard Technology: When the 2014 Chevy Malibu hits the lot this fall, it will be the first mid-size sedan in the U.S. to offer fuel-saving start/stop technology as a standard feature. The system automatically shuts off the engine while waiting at a stop, and reactivates the engine when the brake is released, increasing fuel-economy by 14% in city driving. Learn more here

Proposed Seat-Belt-Ignition Requirements: Automakers are proposing systems that force drivers to buckle up before a car will start. BMW says this would free up space, because they could engineer car built to protect seat-belt users only, and not have to design vehicles built to protect unbuckled drivers as well. This could also free up interior space and make for lighter vehicles, say the automaker.

Check out our complete inventory of New and Used Cars.