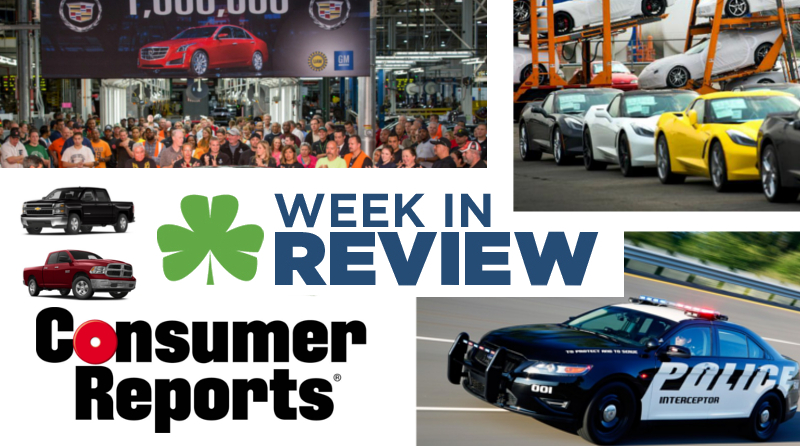 It was quite a week for the automotive industry, with a setback for the electric car industry but a push forward for another future technology.

Find out which major sports car is heading to Cedar Rapids, and what manufacturer has created a fuel-saving car of America’s police departments.

Silverado at the Top of Segment: Consumer Reports released their rating for light duty pickups, with the 2014 Chevy Silverado taking the top spot, followed closely by the Ram 1500. The Silverado was given high marks for towing and capability, while the Ram was hailed as the best truck for daily commuting. Learn more here

Charging Stations Company Files for Bankruptcy: Ecotality Inc., a major manufacturer of charging stations for electric cars, has filed for bankruptcy and plans to auction its assets next month. The San Francisco-based company won a $99.8 million grant from the U.S. Department of Energy four years ago, but was unable to thrive amid a national market that has yet to popularize electric vehicles.

One Millionth Cadillac out of Lansing Plant: GM’s assembly plant in Lansing, Michigan produced the 1 millionth Cadillac to come out of the facility, a red 2014 CTS. The facility was opened in 2001 and has made every single CTS on the road. Over the past three years, GM invested $190 million to retool the plant.

Tesla Working on Self-Driving Car: Tesla is joining the ranks of companies trying to create practical and functional self-driving cars. CEO Elon Musk told the Financial Times that his goal is to create a vehicle that handles 90% of driving.

2014 Chevy Corvette Stingray Has Been Shipped: The next generation of the iconic sport car has been shipped from GM’s plant in Kentucky and is now headed for Cedar Rapids. The first 1,000 Corvettes were completed earlier this week and will be available in the near future. Learn more here

Honda Odyssey Recall: Honda announced a recall of about 318,000 minivans built between 2003 and 2004 due to a malfunction with the airbags. The problem relates to the airbags inadvertently deploying when a crash has not occurred.

Ford Working on Fuel-Efficient Cop Car: The Ford Motor Company has created a fuel-saving police cruiser with a 2.0L EcoBoost engine. Ford says the vehicle was created at the request of department heads who wanted to on save fuel costs and will be mostly used by officers who don’t need highway pursuit horsepower, such as detectives and campus police.

Kia adding Rear-Wheel Drive Luxury Sedan: Kia announced that it is creating a full-size rear-wheel drive luxury sedan that will be available early next year. The car is expected to be called the Kia K-900, and will move the brand further into the luxury segment alongside the Kia Cadenza.

Your Source for New Cars and Trucks in Cedar Rapids

If you are in the market for a new or used vehicle, contact McGrath Auto.

We’ll help you find the right car at the right price, so give us a call today!