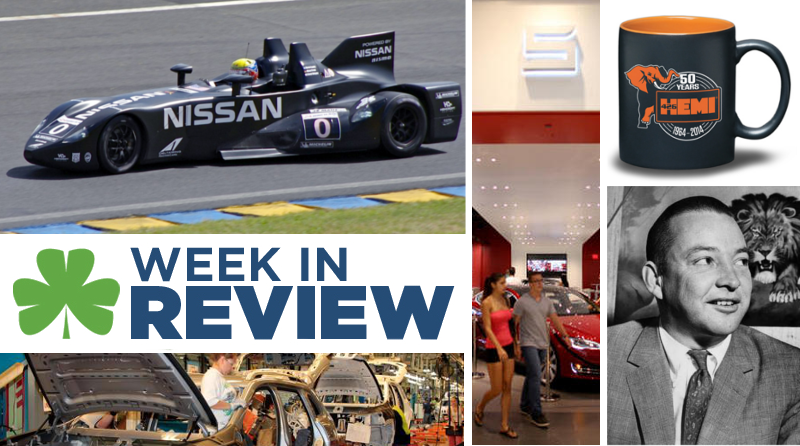 Spring is starting to show, with warm weather, melting snow, and new life for the automotive industry.

Find out how Chrysler is celebrating 50 years of HEMI power, and how you can get $100 for test driving a luxury car.

Also – what is Jeep doing to meet the high demand of the Wrangler and Cherokee, and why is Nissan being sued over a racecar?

Ford Motors Mourning Loss of Leader: William Clay Ford, the last surviving grandchild of founder Henry Ford, passed away this week at the age of 88. Although William never held the top executive position with the company, he was very influential is the design department and held jobs including vice chairman and finance committee chairman. He was also owner and president of the Detroit Lions.

Kia Shows Engineering Innovation with a Bicycle: Kia showed two electric-powered vehicles at the Geneva Auto Show in Switzerland. These bikes are significant because they were built using a sophisticated metal stamping and welding process that could change the way cars are built in the future. The process allows for simpler manufacturing, better quality control, and more design flexibility.

Easing the Jeep Work Load in Toledo: Part-time workers are being brought in to help ease the work load at Jeep’s assembly plant in Toledo. Due to a sharp spike in demand over the winter, factory workers building the Wrangler and Cherokee have been putting in 60-hour work weeks, prompting leaders to increase the workforce.

Study Finds Gen Y Still Wants Cars : Strategic Vision is busting the common theory that younger people don’t buy vehicle because they don’t care about cars. According to their study, Gen Y doesn’t buy as many cars because they can’t afford them, largely due cell phone bills, student loans, and other costs that eat up their budget.
Think you can afford a car? Think again. McGrath Auto has a huge inventory of new cars priced below $20,000!

Nissan Being Sued over Racecar: Dr. Don Panoz, the principal owner of the DeltaWing racecar, is suing Nissan, claiming the automaker infringed on his ownership rights when creating the recently-unveiled ZEOD racecar and road-going Blade Glider concept. The arrow head-shaped design was used by Nissan in past racecars but the design was purchased by Dr. Panoz.

Tesla May Be out of New Jersey: Citing laws designed to protect consumers, New Jersey’s motor vehicle officials have approved regulations that would require all new car dealers to obtain franchise agreements. This would mean two direct-to-consumer Tesla stores may be forced to change the way they conduct business or shut down.

HEMI Engines Celebrating 50 Powerful Years: Chrysler’s first HEMI engine debuted 50 years ago, and the group is celebrating with a new logo and a line of merchandise, including tee shirts, coffee mugs, watches, and more. HEMI engines first debuted in 1964 and are currently powering vehicles in the Dodge, Jeep, Ram, and Chrysler lineups.

Get $100 to Test Drive a Cadillac: During the month of March, qualifying drivers who visit McGrath Buick GMC Cadillac in Hiawatha can receive a $100 prepaid card – simply for taking a new Cadillac for a test drive. Simply stop in, drive a new Cadillac, tell us what you think, and receive $100. Call us today at 888-696-1133 to learn more about this limited time offer.

Contact McGrath Auto to learn more about our large inventory of new and and used vehicles.

We want to help you find the right car at the right price, so visit one of our 6 location in the Cedar Rapids and Iowa City area today!