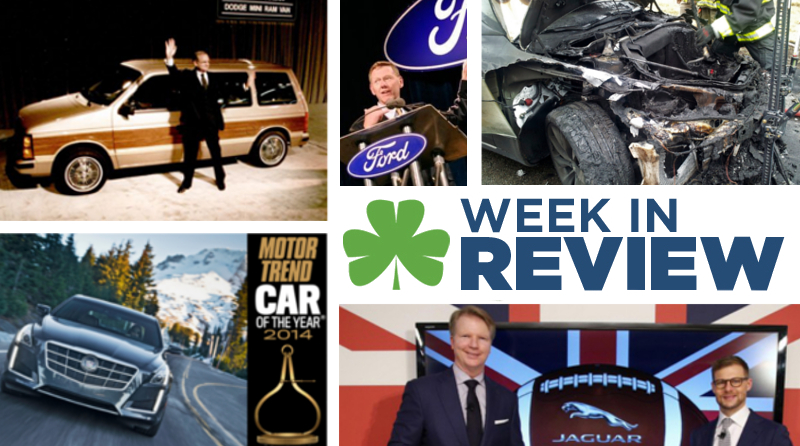 This week’s automotive news had a lot going on, with sales reported for the month of October, and the 30th birthday for an industry changing vehicle.

Find out which automaker is dealing with a string of fires, and what British automaker is getting involved with American’s favorite game.

Also, an American-made vehicle has won Motor Trend Car of the Year, injecting some much needed pride into Detroit.

Third Fire for Tesla in Six Weeks: Federal investigators may get involved after another Tesla Model S erupted in flames after an accident in Tennessee. Local investigators are looking into the fire, which cause Tesla stock to drop 7% overnight. NHTSA has yet to say whether they will launch a formal investigation.

30th Birthday for Chrysler’s minivans: The iconic Chrysler minivan was launched in November of 1983, forever changing the way Americans view the family commuter. The vehicles melded cargo van utility with passenger car comfort, and were a sales success despite a rocky development process. Learn more here

Ford CEO Headed to Microsoft? The rumor mill continues for Ford CEO Alan Mulally and his potential position at the helm of Microsoft. The Ford executive has made the short list of 5 external candidates to replace outgoing CEO Steve Ballmer.

SEMA Show Gets Red-Hot: The 2013 SEMA Show heated up in Las Vegas, with incredible displays from automakers like Kia, Chevy, and Chrysler. The show gives these companies a chance to display their creative side, with souped-up engines, elaborate designs, and flashy paint jobs.

Honda Minivan Recall: Honda is recalling about 344,000 Odyssey minivans in the US due to a software defect that cause the vehicle to suddenly and harshly brake without the driver pressing the brake pedal. Automotive News is reporting that Honda will not be able to make the fix until spring because a necessary part is not available.

October Sales Rise 10%: Overall American automotive sales were reported, with a sales rise of 10%. The rise occurred after sales dipped 4% in September. The positive numbers show a strong automotive industry that is capable of weathering government shutdowns and maintaining positive growth.

If you are looking for a high-quality car in the Cedar Rapids and Iowa City area, you need to call McGrath Auto at 877-226-0908.

We want to help you find the right car for your needs and budget, so give us a call and let us get started today!