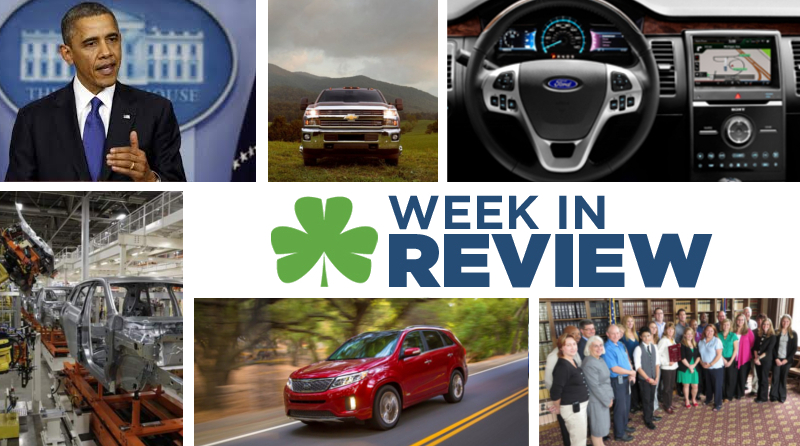 Truck launches and legal battles highlighted this week in the automotive industry.

Find out why one group has filed a lawsuit against the Obama administration, and why the bosses for some Japanese parts makers may be heading to prison.

Ford Phasing out Infotainment Benefits to Dealers: Ford Motors is dropping a cash allowance it gives dealers to help train customers on the use of its infotainment systems: Sync and MyFord Touch. The money was intended for dealers to hire infotainment experts who teach customers about the systems.

General Motors Receives Environmental Partner Award: GM and seven of its facilities were recognized by the Michigan Department of Environmental Quality for their longtime support of environmentally-focused community collaboration. This marks the 7th straight year that GM has earned the honor. Learn more here

Car-Safety Coalition Sues U.S. Government: A group of car-safety advocates, including two individuals and four organizations, filed a lawsuit against the Obama administration in an attempt to make rear back-up cameras a federally-mandated feature. The group says the law would help save lives, while opponents say more development is needed before the technology can be mandatory. Learn more here

GM Launches 2015 Heavy-Duty Trucks: General Motors unveiled the 2015 versions of its heavy duty pickups, including 2500 and 3500 versions of the Chevy Silverado and GMC Sierra. The exterior and interior have been redesigned and updated, while the engines are carrying over from the previous models. Learn more here

Japanese Part Suppliers Admit to Price Fixing: 9 Japanese suppliers of safety belts, radiators, starters, and other parts have agreed to plead guilty to conspiracy charges related to price fixing. The companies will pay a total of $740 million dollars in fines, with potential prison sentences coming for company bosses.

Chrysler Restores 2nd Shift at Cherokee Plant: Chrysler is bringing back the second shift to build 2014 Jeep Cherokees at its Toledo Assembly Complex in Ohio. The automaker had put the shift on hold because a large amount of Cherokees had been built but had not been shipped.

If you are in the market for a high-quality new or used vehicle, contact McGrath Auto today.

We want to help you find the perfect vehicle for you and your family, so work with us immediately!