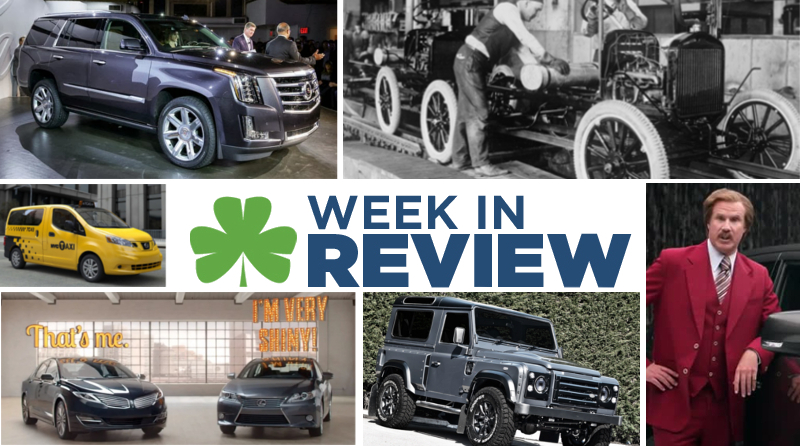 The automotive world was full of activity this week, highlighted by new ad campaigns from 2 major American automakers.

Find out what luxury brand debuted their flagship SUV, and what brand received a setback for its New York taxi plans.

2015 Cadillac Escalade Makes First Appearance: The redesigned 2015 Escalade made its first appearance at a special event in New York City Monday night. The new Escalade has an updated exterior that is sleeker and more aerodynamic, but the biggest upgrades were made in the SUV’s interior. Learn more here

Larger Cadillac Crossover Coming Soon: At the special event for the 2015 Escalade, Cadillac leaders also gave hints that a larger crossover may be in the works. What’s more, the unibody crossover may bear the Escalade name, although Cadillac’s senior VP Bob Ferguson stressed that no decision has been made at this time.

Hey Everyone! Come See How Good Dodge’s New Spokesman Looks: Dodge made a big splash in the automotive marketing realm by releasing commercials starring Will Ferrell as Ron Burgundy, the over-groomed, under-informed newsman from the Anchorman films. Will Ferrell/Ron Burgundy is repping the all-new 2014 Dodge Durango in comedic 30 second and 1 minute films. Watch the Videos Here

Lincoln takes on Lexus: Lincoln has put rival luxury brand Lexus squarely in its sights with a series of commercials that directly target Lexus vehicles. The spots show the Lincoln MKZ and Lexus ES being interviewed by prospective buyers. The commercials attempt to rebound Lincoln from a poor initial launch of the MKZ.

100th Anniversary of the Ford Assembly Line: This week, Ford Motor Co. celebrated the 100th anniversary of the moving assembly line, an innovation that changed manufacturing and made cars affordable for thousands of people.

End of the Land Rover Defender: British automaker Land Rover has announced that it will end production of the Defender, an all-terrain SUV similar to the Jeep Wrangler. The Defender nameplate was first used in 1983, although before that is was called the Land Rover Series. Land Rover claims it will have a comparable replacement in the next few years.

Nissan’s “Taxi of Tomorrow” Hits Judicial Speed Bump: Plans to put Nissan NV 200 on the streets of New York City hit a major snag when a judge ruled that the city’s Taxi and Limousine Commission overstepped when it ordered operators to buy vehicles from only one brand. The deal is worth about $1 billion to Nissan, but the judge ruled that the commission can’t require the purchase of a particular vehicle.

Legal Victory for Toyota: A Los Angeles jury has ruled that Toyota is not liable in the 2006 death of a woman whose Toyota Camry apparently accelerated and crashed. The family of the woman claimed that Toyota should be held liable for failure to install a brake override system.

If you are in the market for a new vehicle, contact McGrath Auto today.

We have a large inventory of new and used cars, and we’d love to help you find a great car at a great price!