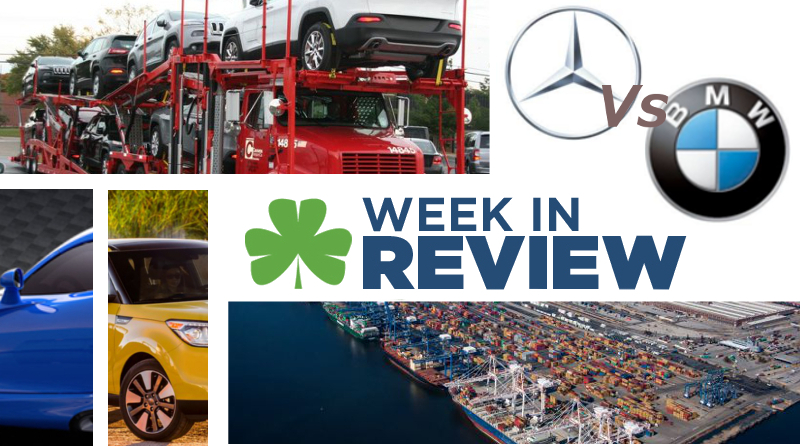 This week’s Automotive Week in Review is full of forward movement. A major east coast port has reopened, and a delayed SUV is now heading to Cedar Rapids.

See what German luxury brands are trading verbal volleys, and how you can become a part of Viper history.

2014 Jeep Cherokees on Their Way: After a two-month delay, the 2014 Jeep Cherokee is on its way to Cedar Rapids. The all-new Cherokee, which is returning after a 12 year hiatus, was expected to arrive in August but was delayed to perform vigorous quality checks to the powertrain and improvements to the transmission software.

Baltimore Port Fully Reopened: The Port of Baltimore, which is a major gateway for imports like BMW and Mazda, was fully reopened on Friday, Oct. 18th after an agreement was reached between the longshoremen’s union and the Steamship Trade Association of Baltimore. A work stoppage had halted shipments since October, 15th.

Name that Viper Color: The Chrysler Group is seeking your help to name the blue paint that they are using on the next SRT Viper sports car. A panel of judges will select the top three color names, and a national vote will decide the final winner. The grand prize is a trip to the 2014 Rolex 24 at Daytona in February. Learn more here

2014 Chevy Camaro Track Video Goes Viral: Chevy released a point-of-view video of the 2014 Chevrolet Camaro Z/28 doing a lap on the Nurburgring track in Germany. The Camaro Z/28 ran a time that puts it in the company of the world’s most respected sports cars.

Kia Soul Wins Active Lifestyle Vehicle of the Year: The 2014 Kia Soul was recognized as the best vehicle for active individuals and families by the Active Vehicles Lifestyle group. The organization encourages and facilitates communication between active people, such as campers, bicyclists, and kayakers, and automakers. Learn more here

Toyota Loses Major Court Battle: Toyota has lost an unintended acceleration case related to the death of a woman driving a Toyota Camry. An Oklahoma jury fined Toyota $3 million and determined that the automaker worked with “reckless disregard”. Toyota, however, has denied there were defects in the Camry.

BMW, Mercedes-Benz Rivalry Back on the Burner: The two German luxury automakers renewed their rivalry this week a few verbal volleys. Mercedes-Benz USA boss Steve Cannon said that his brand will outsell BMW this year through “natural sales, (and) great execution”. BMW released a statement later in the week saying it’s 4th quarter momentum is strong, and it will wait for the final results in January.

More Dealers Seeking Non-“Car Guys”: Automotive News released a story about dealerships across the country seeking individuals from various industries, such as restaurants and real estate. The story said these people bring a wide variety of experiences and talents and help enhance a dealership’s overall business. This story parallels McGrath Auto’s philosophy, as we are always looking for talented and motivated people from all sorts of backgrounds who can bring various skills to our organization. Learn more here

New and Used Cars for Iowa City and Cedar Rapids

Contact McGrath Auto today to learn more about our large inventory of new and used cars.

We want to work with you, so give us a call and get started today!