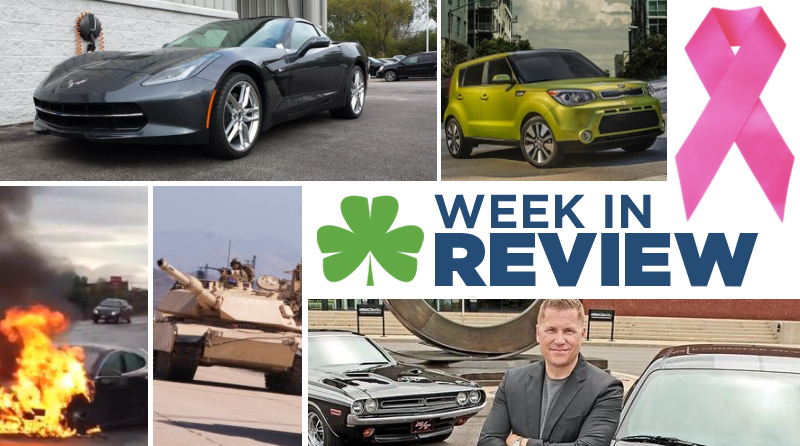 The federal government may be shutdown, but the automotive industry continues to roll along.

This week was pretty exciting, with tanks and fires making it into the automotive news.

Find out what exciting sports car has arrived in Cedar Rapids, and what Dodge has planned for it’s 100th anniversary.

2014 Chevy Corvette Arrives in Cedar Rapids: The highly anticipated 2014 Chevy Corvette Stingray is finally here. The powerful sports-car, which features a 6.2L V8 that delivers 460 hp, was the talk of the town when it was unveiled at the Detroit Auto Show in January. For more information about the all-new Corvette, contact McGrath Chevyland. Learn more here

Plans for All-Electric Kia Soul Announced: Kia Motors has announced plans for an electric-powered Kia Soul, with availability in select cities expected in 2014. More details about the Soul EV’s range and powertrain will be announced at an upcoming auto show.

GM and U.S. Army Teaming up for Fuel Cell Technology: A U.S. tank research division is working with General Motors to advance hydrogen fuel cell technology. The technology could be used in cars, trucks, tanks, ships, and other equipment. Learn more here

September Sales Reported: Automakers reported their September results, with a general cool-down from the summer numbers. The total annual sales estimate (based on sales trends) dropped from around 16 million to 15.3 million units. Cadillac buck the overall trend, with a 10% rise in sales.

Tesla Model S Fire Causes Media Stir: The electric-powered Tesla Model S has one of the best safety ratings on the road, but when one caught fire after an accident in Seattle, the vehicle’s safety was called into question by sources including ABC News and the Washington Post. While many experts point out that car fires are far from uncommon no matter what you drive, the incident did cause a significant drop in Tesla stock price.

Dodge Plans for 100th Anniversary Editions: Although they had been making car parts since 1900, the Dodge brothers didn’t start making cars until 1914. Dodge head Tim Kuniskis said the car brand is working on plans for 100th anniversary editions of Dodge vehicles, although details have yet to be released.

Contact McGrath Auto to learn more about our tremendous service and large inventory of new and used service.

We have the right car waiting for you, so give us a call today!